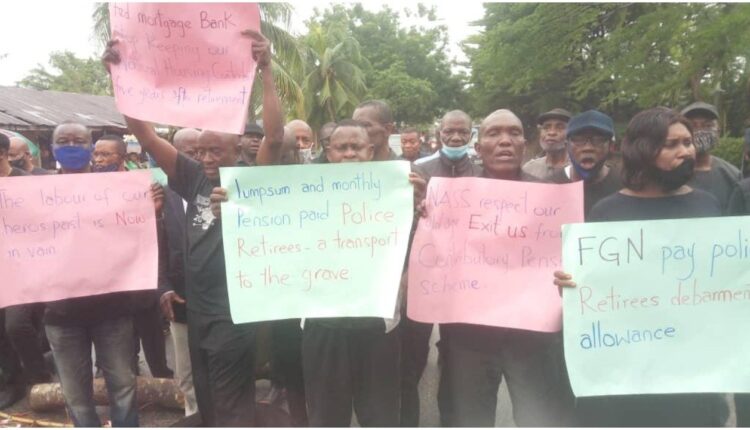 The Association of Retired Police Officers of Nigeria are currently protesting the alleged unfair treatment of their members by the the Contributory Pension Scheme of PenCom, urging President Muhammadu Buhari, to move them from the scheme and attached to another scheme that would cater for their welfare efficiently.

The protesters who were armed with different placards with inscription such as ‘We Need Total Exemption of Police from Contributory Pension Scheme’, ‘Police Pensioners Reduced to Beggers’, among others marched to the National Assembly complex to register their grievances over pension delay and other alleged anomalies on part of the scheme.

The demonstrators from 27 states and the Federal Capital Territory are demanding that they should be excluded from the scheme just like their counterparts in the Department of State Services and other security agencies.

They argued that the scheme was making officers who had used the youths in serving the country wallow in poverty as they are earning poor pensions after 35 years of active service.

Meanwhile, a bill for an Act to amend the Pension Reform Act 2014 so as to exempt the Nigeria Police Force from the Contributory Pension Scheme has passed second reading. Sponsored by Rep Francis Waive (APC-Delta), the bill was read for the second time on the floor of the House of Representatives on Tuesday, in Abuja.

Leading the debate, Waive stated that the bill sought to amend Section 5, sub-section 1 paragraph (a) of the Pension Reform Act of 2014. According to him, this will include the Nigerian Police Force as part of the categories of persons exempted from the Contributory Pension Scheme, which presently include members of the Armed Forces, the intelligence and secret services of the Federation.

The lawmaker said that the Nigerian Police was brought under the current pension scheme by former President Olusegun Obasanjo’s administration. He said that Obasanjo modelled the country’s Contributory Pension Scheme (CPS) after the Chilean ‘Chilere’ pension scheme, which exempted both the armed forces and the police from the scheme.

Waive said, “unfortunately, in adopting the same model, he brought the police under the Nigerian Contributory Pension scheme, while exempting the military and other intelligence agencies. The lawmaker said that the Nigeria Police Pensions Limited emanated from a Presidential approval that was aimed at enhancing the welfare of serving and retired police officers.

“Consequent upon the approval, the National Pension Commission (PENCOM), was in 2012 directed to guide the Police towards the establishment of a Nigeria Police Pension Fund Administrator.” This, according to him, was in order to remain within the Contributory Pension Scheme and to address all other areas of concern on welfare and pension matters.

He, however, alleged that operating under the current pension scheme had been both unpalatable and regrettable for the retirees of the Nigerian Police Force. “The Police, being the front line security agency in the country, were exposed to dangers day and night more than the other security agencies and as such deserved better treatment during and after service.

Uzoma Abonta (PDP-Abia), in his contribution, said that other security agencies should also benefit from the exemption. However, an overwhelming majority of the lawmakers agreed with the sponsor of the bill, enabling it to scale second reading.