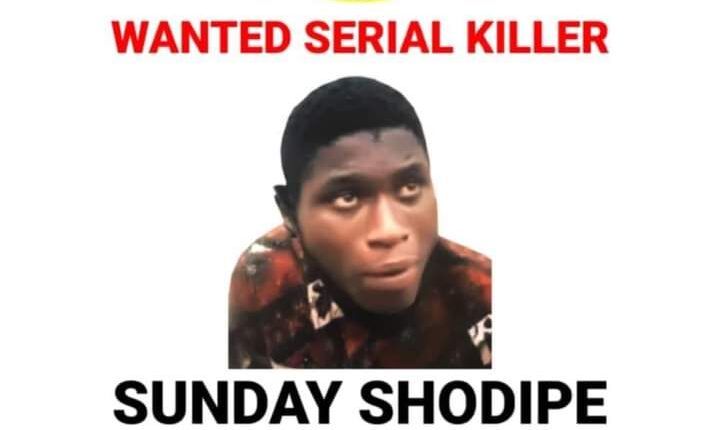 The Oyo State Police Command has rearrested suspected serial killer, Sunday Shodipe, who fled from its custody after his initial arrest in connection with killings in Akinyele Local Government Area of the state.

Confirming his arrest, the command’s spokesman, Gbenga Fadeyi, said that the 19-year-old suspect was rearrested in the home of his grandmother in Ojoo area of Ibadan.

The Guild had earlier reported that Nigeria Police announced a reward of N500,000 for anyone with information that could aid re-arrest of the suspect.

Announcing the bounty, Commissioner of police, Oyo command, Joe Enwonwu, through a statement made available to newsmen on Thursday by the command spokesperson, Olugbenga Fadeyi, assured that the funds awaits anyone with information on whereabout of the 19 years old suspects.

Enwonwu, who admitted that the suspect was paraded along with two others in connection with killings in July escaped on August 11, stated that the law enforcement agency needed the public assistance to apprehend Shodipe.

It would be recalled that Shodipe, who had been charged to court, was announced by the police to have escape from its custody at Mokola Police station in Ibadan five days after.

“The Commissioner of Police, Oyo State Command, CP Joe Enwonwu, psc wishes to state that handsome reward of Five hundred thousand naira only (#500,000) awaits whoever gives useful information for the arrest of the suspected serial killer at Akinyele Local Government Area of Oyo State, one Sunday Shodipe ‘m’ 19yrs who was arrested and paraded at the Oyo State Police Command Headquarters on 17th July, 2020, but later escaped from lawful custody on 11th August, 2020″.