The Nigerian Police has announced a reward of N10 million for anyone with information that could aid the arrest of two suspected criminals who have been on the run recently.

As gathered, the two suspects’ images were captured at the scene of a crime through a Closed Circuit Television (CCTV) in the country and has since been evading police arrest.

Announcing the bounty, Police spokesman, Frank Mba, in a statement posted on the law enforcement social media handle, on Thursday, said that anyone with vital information that could aid the arrest of the suspects. 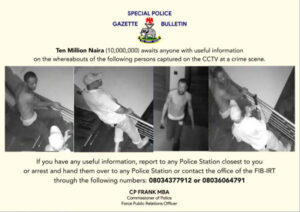 In the statement, the police further asked citizens to report to the closest station, if they have any details that could lead to arrest of the individuals captured by CCTV.

He said: “Persons with credible knowledge about the whereabouts of the individuals were advised to report to a police station”