Afghanistan footballer dies after falling off US evacuation… 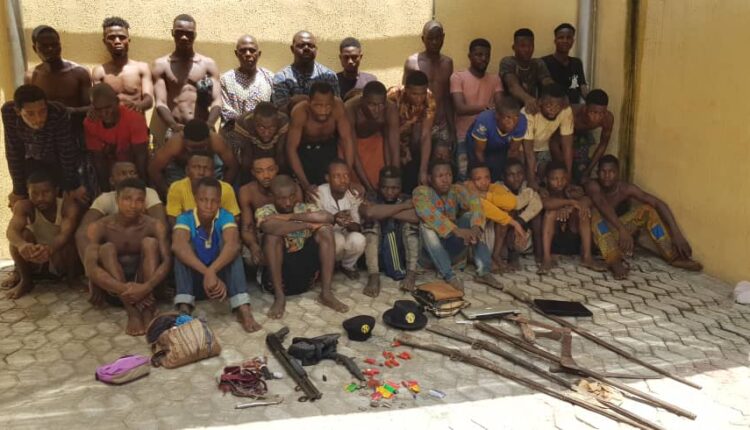 Records of Nigerian Police, Lagos Command activities revealed that no fewer than 577 armed robbers and cultists were arrested between the 1st of January and mid-March of 2021 across the state.

A breakdown of the statistics revealed that 234 were suspected robbers and 343 alleged cultists were said to have been arrested by the law enforcement agency.

Also, the law enforcement agency records further revealed that 265 pieces of ammunition were recovered from the suspects and 91 murder cases recorded within the period under review in Lagos.

The statistics were contained in the speech delivered by the Commissioner of Police, Lagos Command, Hakeem Odumosu, on Monday at the headquarters in Ikeja.

Odumosu revealed that 75 robbery operations were foiled within the period, while 232 stolen vehicles were recovered in Lagos in the last three months.

The commissioner disclosed that 91 rape and defilement cases were reported to the command, while 127 gender-based cases were also reported.

More so, he disclosed that the command raided and arrested 1,592 suspected hoodlums in the first quarter of 2021, while 532 motorists were arrested for traffic offences within the same period.

He said while the command seized 2,953 commercial motorcycles popularly called Okada for violating the traffic law, 103 fatal accidents were recorded within the period.

He added that 22 clubs and bars were raided during the period, just as 997 suspects were arrested for violating COVID-19 protocols, while 184 motorcycles and 10 tricycles were recovered.

Odumosu revealed that 3,258 cases were charged to court by the police in the last three months, with 1,107 people convicted and fined.

According to him, within the period under review, January-Mid March, 2021, the Command has harnessed all resources within its reach and instituted proactive strategies to enforce laws and orders in all areas which include traffic, criminal and health-related issues, especially COVID-19 protocols in the state.

“It is not out of point to also state that the efforts of the command have paid off in suppressing various criminal activities as well as traffic lawlessness by recalcitrant drivers, Motorcyclists and hoodlums who have been causing mayhem and engaging in other criminal acts like cultism, armed robbery, land grabbing, gangsterism, hooliganism, sexual abuses and domestic violence”.