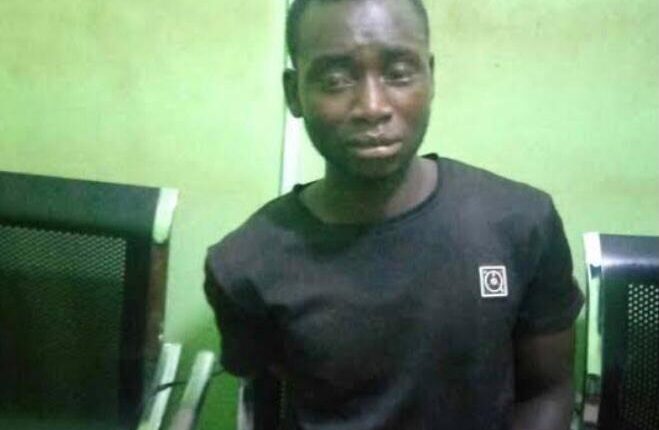 The Nigerian Police, Edo Command has disclosed that it has apprehended an alleged notorious kidnapper, Yusuf Aliu, said to have been terrorizing residents and motorists along Benin-Auchi express road and its environs.

Aliu, who was said to have been declared wanted by the law enforcement agency, was reported to have been apprehended along the Old road in Aduwawa axis in Benin City.

It was gathered that he went into hiding and several attempts to arrest the suspect were previously unsuccessful after he got wind that the law enforcement agency had declared him wanted and could apprehend him over different atrocities committed along the road.

Confirming Aliu’s arrest, the state’s police spokesperson, Kontongs Bello, said that the suspect was arrested after several attempts by operatives of the anti-kidnapping and Cyber Crime Unit of the Command.

According to him, the suspect, who was the leader of a gang of four kidnappers that abducted one Lucky Ojezele in Idumwengie Community along Benin-Auchi Road earlier in the year was arrested after he came out of his hideout.

The spokesperson, in a statement made available to newsmen on Friday, hinted that the suspect’s arrest was achieved after intelligence tracking, adding that the suspect confessed to the crime upon interrogation.

While noting that efforts were ongoing to nab the other two suspects, the police said one of the gang members; Philemon Timothy, had earlier been arrested and has since been charged to court.