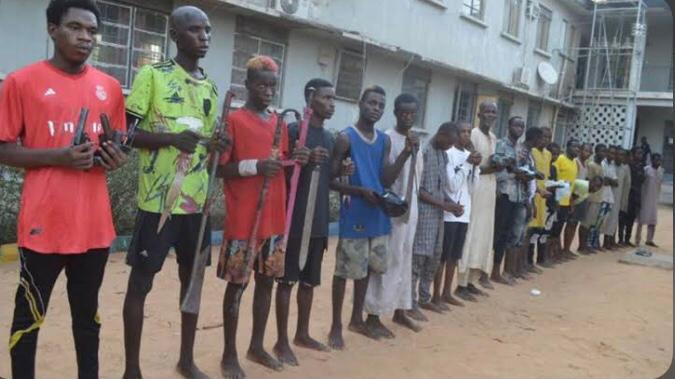 No fewer than 21 suspected drug dealers in possession of over N33 million illicit drugs have been placed under detention after their arrest by the Kano State Police Command.

It added that 42 suspected notorious thugs, called Yan Daba were also apprehended by the state law enforcement agency during a clearance operation across the eight local government areas of Kano metropolis.

Confirming the arrest, the state Police Public Relation Officer, DSP Abdullahi Haruna, revealed that the 42 suspected thugs, 21 suspected drug dealers were arrested from May 30 to June 1 based on information received by the Command Police Rapid Response Squad(RRS).

The police spokesman, in the statement made available to newsmen on Thursday, said the clearance operation was part of efforts to rid the state of all forms of criminality, especially thuggery and drug abuse.

Haruna listed items recovered from the suspects to include a large number of arms, illicit drugs (Tramadol) worth N29.9 million, and exol tablets worth N3.2 million were recovered during the operation.

The Spokesman noted that the state Commissioner of Police, Sama’ila Dikko, commended the stakeholders for their prayers, support, encouragement, and cooperation.

“The state Commissioner of Police promised that the police will continue to remain steadfast and resolute in safeguarding lives and property,” the statement reads.