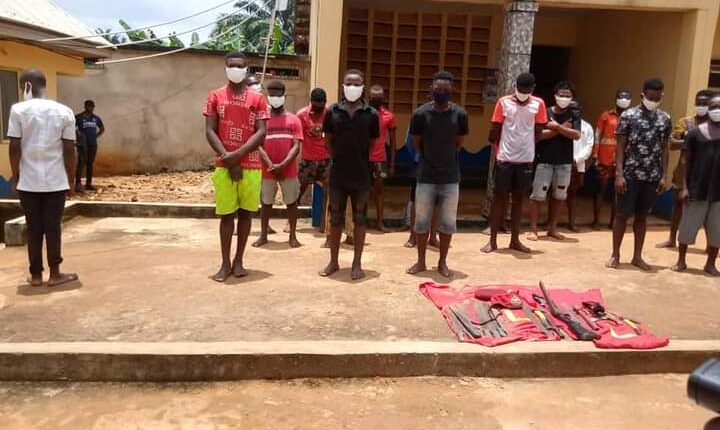 No Fewer than twenty suspected cultists have paraded by members of the Anti-Cult unit police Command after their arrest in Anambra.

It was gathered that the suspects were arrested on Monday, with the aid of intelligence information from anonymous sources after cult clashes over the week.

One of the underaged suspects, Master Echezona Metu from Igbo-Ukwu, who is an SS 1 student of Community Secondary school Igbo-Ukwu was arrested with a single barrel gun inside the school premises.

According to Master Metu, the gun belongs to his aged father who fought in the Biafran Army, and he was at the school with the gun to prove to his classmates who were doubting that his father was a Biafran Army.

Parading the suspects at the command’s Anti-Cult unit in Enugwu-Ukwu in Njikoka council area, the state Commissioner of Police, Mr. John Abang appealed to Ndi Anambra and other residents in the state to always monitor the movements of their children and also take note of the kind of friends they keep.

He assured that the command will not relent in its efforts to ensure that the state gets rid of crimes and criminality.