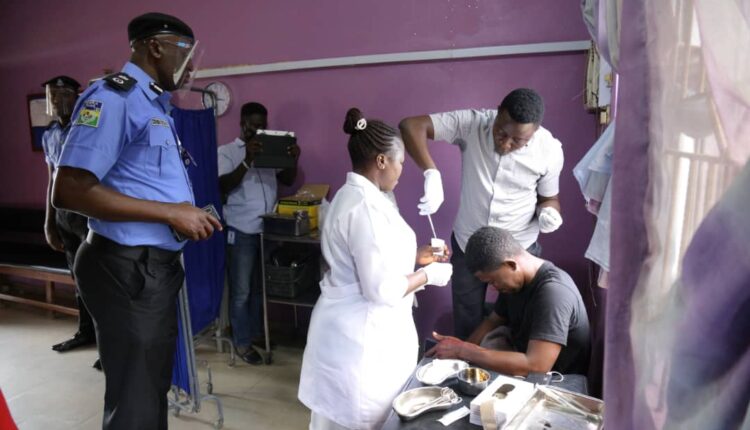 The Nigerian Police has placed an Inspector, Adadu Innocent, under detention for allegedly attacking a reporter with Punch newspaper who was covering a protest organised by Civil Society Groups under the aegis of Revolution-Now in Lagos State.

Innocent, while under detention, would be subjected to an orderly room trial for assaulting a journalist identified as  Kayode Jaiyeola during the protest embarked upon by Revolutionnow to express their displeasure over Federal Government policies and programme.

Confirming the officer’s detention, Commissioner of Police, Lagos Command, CP Hakeem Odumosu, said that he met the ugly incident perpetrated by Innocent while monitoring activities of officers deployed to enforce the order against unlawful gathering and protest by groups in the state.

In a statement signed by Police Public Relations Officer, SP Olumuyiwa Adejobi, the commissioner disclosed that he personally took the injured journalist to hospital and ensured Jaiyeola received proper treatment subsequent to discharge.

As gathered, preliminary findings carried out by the Commissioner of Police, meanwhile, reveal that the cop suddenly attacked Punch journalist, without any previous altercation between them.

An eyewitness account from further indicated that the journalist was mishandled and that propelled the Commissioner of Police to order for his trial to serve as a deterrent to other personnel that were fond of engaging in unprofessional and unethical conducts.

The police boss urged the general public to believe in the command’s commitment towards sanitising and reforming the law enforcement system so as to enable it to conform with the international standards.