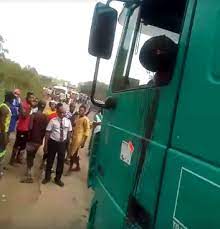 A Police officer in the Nigeria Police, Urbanus Ishaku  may risk demotion after shooting a truck driver, Abdullahi Bello at Gombe-Abba Police nipping-point along Dukku-Darazo road while conducting stop and search in Gombe State.

The officer with tag number AP/no. 204365 and attached to 34 PMF Gombe , was said to have shot Bello on his buttock which left the victim with injuries and he was rushed down to the Federal Teaching Hospital, Gombe for medical attention.

The incident was said to have  left commuters plying the road stranded for several hours following the solidarity of other tanker drivers who were displeased with what the policeman had done by blocking the road with barricades.

Confirming the incident Yesterday through a statement released by the force’s Public Relations Officer, Mary Malum, the Gombe State Commissioner of Police,  Ishola Babaita, described the action of the officer as unfortunate and an act of indiscipline disclosed that the victim was in stable condition as he was responding to treatment, adding that the erring officer has been arrested and was under interrogation at State CID.

Babaita, assured the general public that the police would not let the issue be swept under the carpet, noting that after the ongoing investigations are concluded, disciplinary action will be taken against the officer to deter others of such behaviours.

The Commissioner of Police  further enjoined  the citizens of the state to stay calm as the Police will not tolerate any act of indiscipline from any Police Officer, adding that any police personnel caught in reckless use of his firearm will be dealt with decisively in accordance with the law.

Also, while speaking to newsmen, the Gombe state Commissioner for Information and Culture,  Julius Ishaya, appealed to citizens of the state to maintain calmness over the issue which he said the police command in the state was investigating the matter to unravel the cause of the “misunderstanding”.

Ishaya assured the citizens of the state as well as commuters to remain calm as the state government had taken necessary measures in that regard and the policeman would be made to face the law.

“At this point, we want to appeal to the public to maintain calm as government had taken steps by engaging all parties involved.” he said.