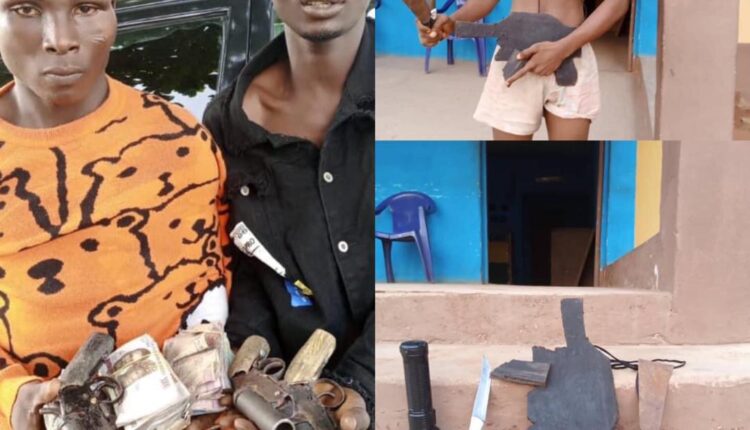 As part of efforts to bring down the rate of crime in Nigeria, the Delta Police Command has arrested three suspected armed robbers at different locations in the state.

As stated, two suspected robbers and kidnappers, identified as Kelvin Godstime, 20, of Upper Afisere in Ughelli North LGA, and Samson Ekutu, 23, of Ugbogeme of Udu LGA were nabbed on 14th, June 2021 on the Warri-Ughelli axis of the East/West Road.

The Command Acting Police Public Relations Officer, DSP Bright Edafe, who confirmed the arrest, explained that the Eagle-Net Special Squad of the command while on a stop and search duty, intercepted a commercial car that the suspects alongside four other passengers were in.

Edafe noted that the countenance of some of the passengers craves suspicion, hence they were all asked to come down for search.

He listed items recovered from the suspects to include three locally made pistols, two handsets, one mobile phone, a power bank, and the cash of N316, 640.00 were recovered in possession of Godstime and Ekutu.

The acting spokesman, in a press statement released on Wednesday, disclosed that one of the armed robbers, identified as Emmanuel Peace, 18-year-old specialized in dispossessing his victims of valuable assets including money with a dummy gun.

According to the statement, Peace was arrested on Sunday, June 13, 2021, at about 2310hrs by men of the Okpanam Police Division.

Edafe explained that Peace was apprehended in a response to a distressed call received that an armed robber entered into the house of the distressed caller forcing victims that do not have cash to transfer money to his account.

“The DPO swiftly deployed patrol teams to the area. The patrol teams on getting to the scene cordoned the area and arrested the suspect one Emmanuel Peace ‘m’ about 18yrs old with a wooden dummy gun.

“The suspect had already successfully forced an aged couple to transfer the sum of six hundred thousand Naira (N600, 000) to an account number owned by one Anwanga Abasi Nathaniel Udo. Other exhibit recovered from the suspect includes two (2) knives and one (1) torchlight”, it added.