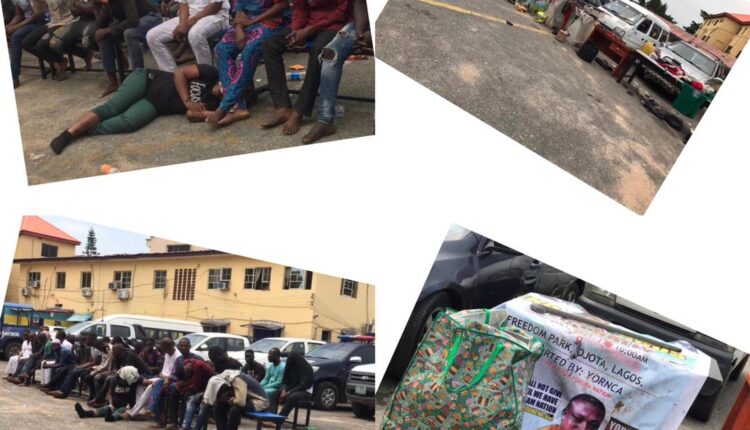 Barely 24 hours after dispersing dozens of Yoruba Nation protesters in Lagos State, the Nigerian Police has arrested as well as detained no fewer than 49 agitators picked during the demonstration and could be arraign before courts by the law enforcement agency for allegedly causing public disturbances across the state.

The 49 protesters including traditionalists, were said to have been picked by the law enforcement around the Gani Fawehimi Freedom park in Ojota axis of the state for engaging in public disorder and defying the Lagos Police Command’s ban placed on public demonstration across the state.

As gathered, the 49 demonstrations had been handed over to the State Crime Investigation Department (SCID) after been paraded at the Lagos Police Command in Ikeja for further investigations on their conduct before and during the demonstration in the state.

Speaking at the command headquarters on Sunday, the Commissioner of Police, Hakeem Odumosu, said that the suspects were arrested for violating the ban that no rally or gathering should hold in any part of the state.

He said, “The press briefing is on what happened yesterday during the Oodua Republic Mega Rally. The Lagos State Government and the police command kicked against any rally of any kind in the state due to the unfavourable intelligence gathered about the rally.

“We advised the demonstrators to steer clear of Lagos State due to the fact that it could not afford another loss that was incurred during the #Endsars.

Responding after they were paraded by the law enforcement agency, the umbrella body of Yoruba Self-Determination Groups, Ilana Omo Oodua (IOO), has requested the unconditional release of 49 suspects arrested during the Yoruba Nation rally yesterday.

The Media and Communications manager for IOO, Maxwell Adeleye, told newsmen that those arrested and paraded by the Lagos Police Command did not commit any offense.

Adeleye, who described the parade as a show of shame, stated that all those arrested and detained by the law enforcement agency were innocent and that they should be released without delay.

“They were picked up, the protest yesterday was aired live on different media outlets and we were peaceful and orderly and not unruly. We were at Panti to secure the bail of the arrested persons, but when we got there, we were told they’ve been transferred to Ikeja. Our lawyers were at Ikeja to stop the parade.

“To Prof. Banji Akintoye it is a sad day for democracy, they claimed to have seen traditional amulets on them, is it a crime? Muslims go to the mosque with their “tesbiyy” while Christians go to church with their Rosaries, even in Osun state there is Isese day. We have those that believe in Prophet Muhammed, Oya, Sango, and the likes.

“It is not fair, because you caught people with charms and amulets, it is not that they were using the charms to attack people, nor using it to foment trouble, just because they were peaceful asking for their right for self-determination, they were arrested.”

“I can assure you that we’ll challenge it legally within the ambit of the law, the lawyers will be there at Panti to secure their release tomorrow. Those arms were not caught in the arms of those protesters. It was just to taint and destroy the integrity of the agitation.” he added.