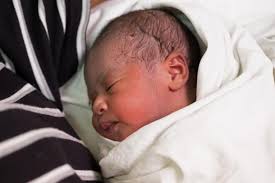 The Lagos Police command  has arrested one Gift Michael, 24, and Florence Douglas, 50, over alleged buying and selling of babies and recovered from them a week old baby.

Police said that investigations revealed that Douglas, a native of Igueben, Edo, who is not a registered nurse operates two maternity clinics, Flofidel Clinic and Maternity Homes.

DSP Bala Elkana, the Police Public Relations Officer, in a statement on Sunday said that Douglas has branches in Alimosho Local Government Area of the state, adding the She has admitted to being in the business of the sales of babies for a while.

“She revealed that a baby girl is referred to as ‘PINK’ while a baby boy is called ‘BLUE’; and are both referred to as ‘MARKET’. She further confessed that the week old male baby found in her custody at Jakande Gate, Ejigbo, was brought to her from Gombe, enroute Akure and was to be sold for N500,000.Babies are usually sold between N500,000 and N1 million depending on their sex” he said.

The DSP, who said that there were pictures of about 50 different babies suspected to have already been sold off in the phone of the suspect, Elkana said that the State Criminal Investigation Department, Panti, Yaba has taken over the investigation of the case.

“Investigation is ongoing and other members of the syndicate will be apprehended,” he said.

Elkana said that the robbery suspects named Seyi Ogundele, 36, aka ‘Spartacus’ and Ogunmola Akintola, 30, aka ‘T-90’ were arrested at their hideout at Coker junction by NNPC road in Ejigbo.

“The suspects have been involved in series of armed robberies within Ejigbo and environs. Investigation is ongoing and the suspects will be charged to court,” Elkana said.