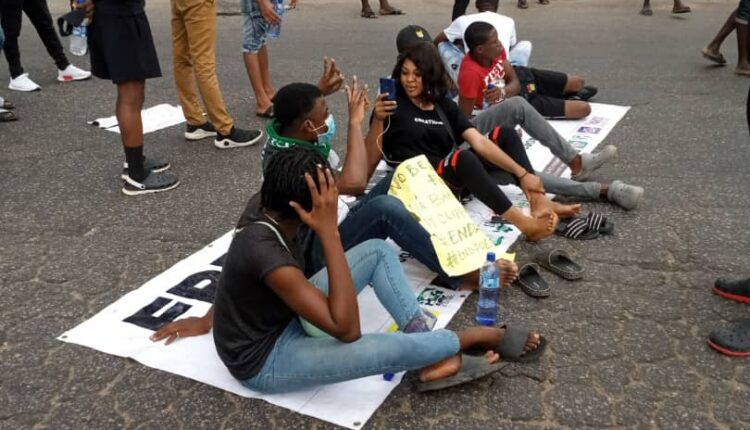 Atleast two persons including a policeman were said to have been killed and several others sustained varying degrees of injuries when officers of the Nigerian Police clashed with youths protesting on Monday against police brutality and extra-judicial killings in the country.

The police officer, who died during the clash, was identified as Erinfolami Ayodeji, an inspector, and a 55 years old commercial driver, Ikechukwu Ilohamauzo, that was hit by stray-bullet while in his car, a Toyota Sienna mini-bus with Number plate LSD 296 FX.

The Guild gathered that efforts by the medical team at scene of the protest to resuscitate the deceased proved abortive.

Also, among the injured persons were two police officers, Ekei Joshua and Peter Agabi, who were both inspectors, and were said to be on admission at Intensive Care Unit of the Lagos State University Teaching Hospital.

Meanwhile, no fewer than four suspects have been detained by the law enforcement in connection with the incident that claimed the lives of the two casualties.

It was gathered that the clash started at about 1pm after some armed youths allegedly laid siege at the Anti Kidnapping Unit of Lagos State Command on Iyun Road, Surulere broke into the cell and liberated two of the kidnap cases suspects, before they were repelled.

Confirming the clash, Police Public Relations Officer (PPRO), Olumuyiwa Adejobi, said that the deceased driver, who got stuck in the traffic caused by the blockage of the road by the violent protesters, was hit by stray bullet.

The police spokesman added that the corpses of the river and his colleague have been deposited at the mortuary for autopsy.

Reacting over the development, Commissioner of Police, Hakeem Odumosu, urged protesters to be peaceful and avoid violent attacks on police personnel or any other security agents.

The commissioner, however, warned protesters not to harass Lagosians by picketing them to forcefully join the protests; and should avoid blocking access routes or roads for other Nigerians who are as well entitled to their fundamental human rights.

He also appealed to parents and guardians to keep watch on their children and monitor their activities to avoid being mobilised and used for illegal activities in the state.