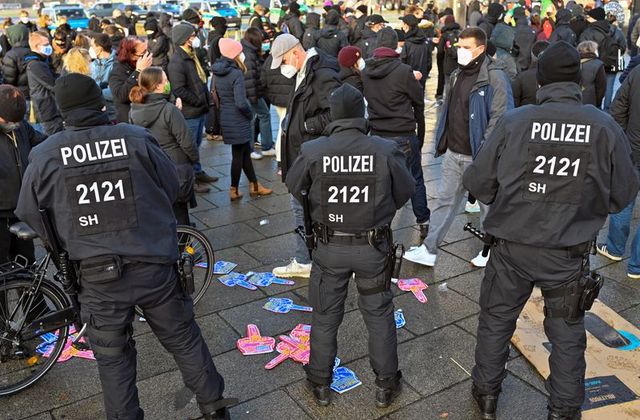 In a bid to prevent the spread of coronavirus in Germany, the country’s police has dispersed hundreds of citizens protesting over lockdown measures imposed by the government to control the disease.

While some gathered in support of the measures imposed to break the spread chain, others were also against the protocols introduced by the government after the disease broke out in the country.

Before the demonstration, Germany’s constitutional court upheld earlier rulings by lower courts that had already denied permission for 20,000 demonstrators to convene in the city centre of Bremen.

Minutes after the protest started on Saturday, German police intervened to break up a demonstration by opponents of coronavirus lockdown measures in the northern city of Bremen after the protest was banned by the country’s highest court.

Confirming the law enforcement officer’s action, Bremen police, through a short statement on its official social media handle, said that they were trying to keep the groups apart and break up the banned gathering, as well as urging people to wear face masks.

The law enforcement officer’s action came one month after it unleashed water cannon and pepper spray in an effort to scatter thousands of protesters in Berlin angry about coronavirus restrictions.

Although most Germans accept the latest “lockdown light” to curb a second wave of the coronavirus, critics argued that the measures endanger citizens’ civil rights.

The head of Germany’s public health agency had earlier claimed that country’s success in dealing with the first wave of the pandemic in March and April had led many people to doubt the virus’s severity or even its existence.

While daily infection numbers are no longer rising as sharply as previously, case numbers have stagnated at a high level, and Germany reported its highest single-day death toll since the start of the pandemic on Wednesday.

On Saturday, the number of confirmed coronavirus cases in Germany increased by 23,318 to 1,153,556, according to data from the Robert Koch Institute for Infectious Diseases (RKI), while the reported death toll rose by 483 to 18,517.

The head of the association representing German towns and districts, Gerd Landsberg, told newsmen that plans to ease the rules over the Christmas and New Year holiday might have to be reconsidered if the virus keeps spreading fast.

Health Minister Jens Spahn predicted that Germany would be able to get 11 million doses of the Pfizer/BioNTech COVID-19 vaccine by the end of March, he told the T-online news portal, adding that he expected mass vaccinations by next summer.