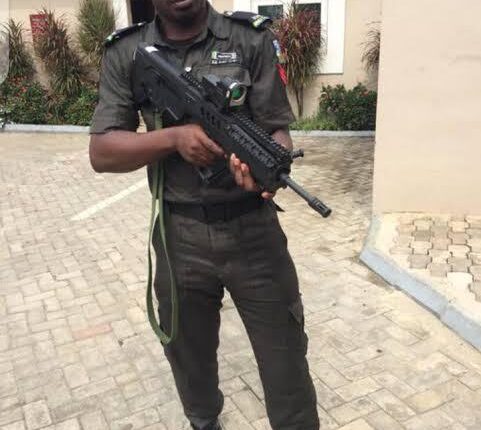 After four months of investigations, the Nigerian Police has dismissed a police officer, Eze Aiwansoba, and arraigned him for attempting to murder his lover, Joy Ndubueze, in Ikeja axis of Lagos State.

Aiwansoba, a Police sergeant, was reported to have been arraigned before a Magistrate Court in Yaba axis of the state after his actions were discovered to have contravened Sec 230, Criminal Law of Lagos State,  2015.

Following his arraignment, the former law enforcement officer attached to the Special Protection Unit, Base 16, Ikeja has been appearing before the court which ordered that he should be remanded pending the outcome of the case.

The reason for the court ruling, as gathered, was that the suspect, after perpetrating the act, flee and was immediately declared wanted by the law enforcement agency before his elder brother, a police inspector in Lagos, went after Aiwansoba, apprehend and handed him over to the command.

It would be recalled that the suspect, who was handed over to the State Criminal Investigation Department of the Lagos State Police Command for investigation where it was revealed that the ex-policeman perpetrated the act, shot Joy on 8th October, 2020, on Salvation Road in Opebi axis of the state.

To ensure fairness, the Commissioner of Police, Lagos, Hakeem Odumosu, ordered that he should be tried and was later found guilty and recommended for dismissal.
Confirming the development, the Police spokesman, Olumuyiwa Adejobi, in a statement made available to newsmen on Monday, stated that the dismissal of the former seageant was contained in a letter numbered PC. 458465/LS/DFA/2, dated 2nd February, 2021.
“After his dismissal, ex-Sergeant Eze Aiwansoba, was transferred to the State Criminal Investigation Department for prosecution via letter numbered AR:3100/LS/SPM/Vol.2/311 dated 3rd February, 2021.
“The State CID had written a letter to the Director of Public Prosecution, Lagos State, for legal advice which was eventually replied, noting that the sergeant should be charged to court for attempted Murder contrary to Sec 230, Criminal Law of Lagos State,  2015.
“The Ex-sergeant was charged to Magistrate Court, Yaba, on 9th February, 2021, with attempted Murder of Joy Ndubueze; and the case is still on.
“The Commissioner of Police, Lagos State, CP Hakeem Odumosu, has therefore assured the general public that no erring police personnel would go unpunished as the command will not condone any act of criminality and unprofessionalism in all areas”, he added.