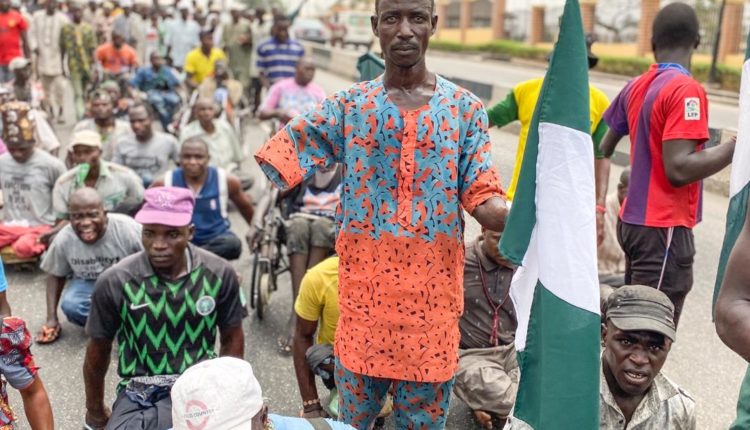 Share
By Olawale Abdul-Fatah
Atleast five Persons Living With Dissabilities (PLWD) have been detained by Nigerian Police, Lagos Command, for protesting against harassment and restriction of Commercial tricycle operators popularly called Keke at State Governor’s office.
Those detained for protesting against restriction of Keke Napep in 15 councils and harassment by law enforcement officers were: Mohammed Zanna, Sarkin Abubakar Umaru, Shehu Issa Daiyanu, Guragu Mustapha Bello, and Guragu Yunusa.
Theguild learned that the detained protesters were whisked away from the entrance of Governor’s office by policemen at about 3 am and chased others away, ending their siege about 16 hours after.
The siege at Governor Babajide Sanwo-Olu’s office came barely 18 days after the protesters, under the code name, #OccupyAlausa movement, visited Lagos seat of power, appealing to the executive and legislatures, to review policy on Keke restriction in the state.
During the first protest, it was gathered that neither the executive nor the legislatures engaged and explain reasons for the action and what government had in pipeline to ease movement within the state.
An impeccable source at the Police Command told our correspondent that the office of the Commissioner of Police ordered their arrest.
The source added that officers, who carried out the chasing and arrest of physically challenged people most without legs or arm, claimed that the Commission of Police, CP Hakeem Odumosu, gave directive that any protesters found around the premises should be arrested, detained and charge to court.
In a joint statement on Wednesday by Physically Challenged Empowerment Initiative (PCEI), the Nigerian Slum / Informal Settlement Federation (Federation) and Justice & Empowerment Initiatives (JEI), the protesters demanded that the charges be dropped immediately.
Speaking on behalf of the three organisations, Megan Chapman, described the protest as peacefully, stressing that they never constituted any threat to security within Alausa secretariat.
She said: “We demand that the frivolous charges against them to be dropped, and for the Governor to respond to the petitions and requests made by these peaceful and lawful protesters, including reversal of the keke ban in favor of pro-people regulation”.