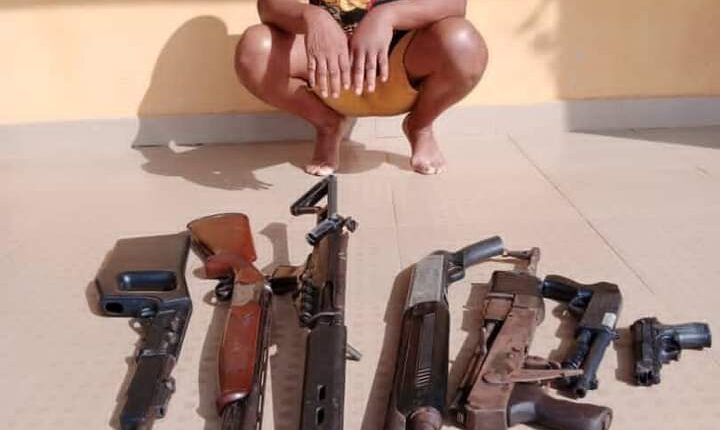 A popular film producer, Mike Omoruyi, has been detained by Nigerian Police after he was arrested with arms that were allegedly obtained without any license in Delta State.

Found in possession of the film producer and recovered by the Delta State Police Rapid Response Squad were: one Lar rifle without magazine, one fabricated AK 47 rifle, one Air rifle, one Pump action, one English double-barrel gun, and two toy guns from him.

The 38-year-old producer was arrested by the law enforcement agency deployed to patrol Obiaruku/Umuebu road and that they conducted their search to recover the arms.

Omoruyi’s detention in police custody pending investigation was confirmed by the Command spokesman, Bright Edafe, on Saturday,  through a statement made available to newsmen in the state.

Edafe said: “An investigation later revealed that the suspect happens to be a producer in the Nigerian film industry who hired the above-mentioned guns for film production.

“Further investigation led to the arrest of the suspected gun runner, one Chief Otuya Josiah ‘m’ 57yrs of Umuebu community who confessed renting same to the first suspect at cost of fifty thousand naira (N50,000.00) for film production. The investigation is ongoing”, he added.