We will prosecute guests at Funke Akindele husband’s… 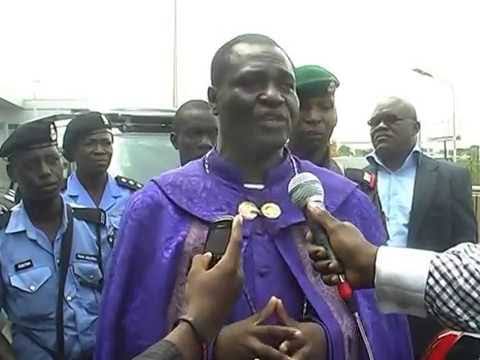 The Lagos State Police Command has  detained General Overseer of Resurrection Praise Ministries International,  Archbishop Samson Benjamin, popularly called Jehovah Sharp-Sharp, during a protest at the China embassy in Lagos over alleged maltreatment of Nigerians in Chinese cities.
Benjamin, before his arrest at the entrance of China’s embassy by the State Criminal Investigation Department in Panti, Yaba claimed that his visit to the embassy was to deliver the message of Nigerians over the persistent assaults on Nigerians in China to the government.
The cleric, who had previously embarked on a one-man protest against the alleged plan by Federal Government to lay 5G cable network during ongoing lockdown imposed to gain control over coronavirus in the country, stormed the embassy with other members of his church to allegedly express their displeasure over the maltreatment Nigerians were subjected to in China.
During the protest that lasted for several minutes before his arrest, he claimed that though he accepted President Muhammadu Buhari was the only public officeholder legalised to deliver Nigerians stance to the Chinese government but he is a Nigerian and has same right like the president to express his opinion on any issue affecting citizens of the country.
The clergyman further argued that his action does not violate the social distancing order of Lagos state nor was he contravening the lockdown imposed by President Muhammadu Buhari to gain control over coronavirus in the country.
According to him, aside my assistant, who is holding the flag of Nigeria, other men you see here came willingly to complain against the maltreatment their fellow Nigerians were presently experiencing in China.
Confirming the pastor detention, DCP Yetunde Longe, disclosed that Benjamin was arrested and detained at state CID after  complained reached police that the man of God was disturbing peace in the neighborhood where the embassy is located in Lagos.

She hinted that during questioning, the pastor claimed to had taking protest to the embassy in solidarity against how Nigerians were been allegedly treated in China and that his actions were capable of breaching peace as it had also voilated social distancing directives of both Federal Government and Lagos State Government.

Meanwhile, the Officer in charge of Legal activities for SCID, Panti, DSP Yetunde Cardoso, told The Guild that the cleric and members of his church stormed China embassy and claimed they were protesting on behalf of Nigerians that were allegedly unfairly treated in different Chinese cities while engaging in their businesses.
Cardoso explained that the law enforcement agency had no option than to arrest and detain the cleric at SCID, Panti for willingly contravening the laws in the country.
While disclosing that Benjamin would be arraigned before court on Wednesday, she stated that the pastor’s conduct was capable of breaching the peace and harmony in the state.
According to her, he has violated social distancing order of Lagos State Governor, Babajide Sanwo-Olu and lockdown directive of the President, aimed to flatten the curve of coronavirus in Nigeria.