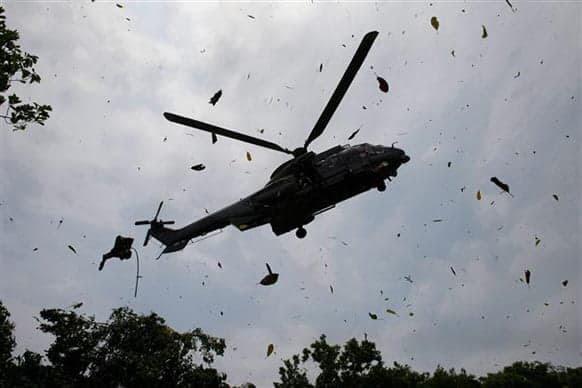 Few hours after AIB reported that an helicopter belonging to Nigerian Police crashed a night ago in Bauchi with six police officers escaping death, the police force has debunked that there was no any aircraft from police that crashed as claimed by the accident bureau in its reports released to the public earlier on Thursday.

The police claimed that the AIB report was not true as there were no helicopter, Bell 429 5N-MDA, from police which had crashed landed resulting in severe injuries of its passengers  at Sir Abubakar Tafawa Balewa International Airport, Bauchi.

Reacting to the AIB reports, the police’s Public Relations Officer, Frank Mba, stated that the said helicopter was only  involved in a controlled safe landing at the airport, adding that all the six victims on board including the pilot, co-pilot and other passengers were unharmed by any injury as reported by accident bureau.

Mba , disclosed that the aircraft was flown by one of the best hands in police piloting which indicated that the crash couldn’t have happened because of his expertise but was professionally safe-landed with minor damage on the rear rotor as a result of obstacle at the landing spot.

However, he confirmed that the helicopter had landed Bauchi airport Yesterday evening as reported by the accident bureau but stressed that no crash happened or injury sustained by passengers on board as claimed.

On his part, the Inspector-General of Police, Alkali Baba, commended the Police Air-Wing for how they were able to handle the situation with their professionalism in safe-landing the aircraft and averting any serious air-mishap that could have happened.

He further noted that the Nigeria Police Air-wing has  a fleet of​ one fixed-wing aircraft, a citation jet and 13 helicopters  which has always recorded a strong history of air safety since its establishment in the year 1972, adding that aircraft safety of its personnel was one priority the force do not take with levity.