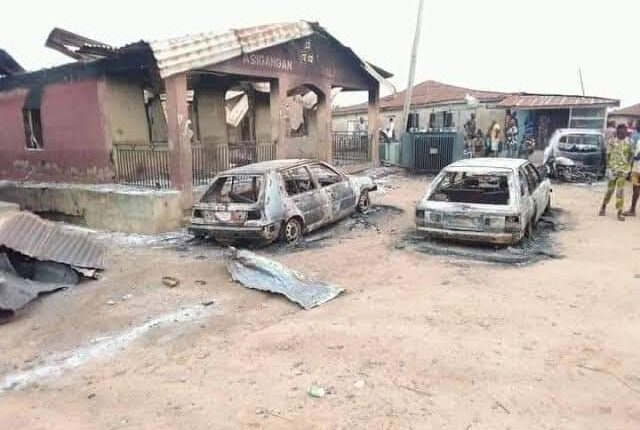 The Nigerian Police, Oyo Command has confirmed that at least 11 villagers died and dozens of others sustained different degrees of injuries during herdsmen attacks in Igangan Community, a town in Ibarapa North Local Government Area of the state.

It explained that the 11 people including some of the assailants died during the attacks that resulted in setting houses, vehicles, motorcycles, and a fuel station sited within the community ablaze.

As gathered, the suspected gunmen had invaded the town at about 11:10 p.m on motorcycles, and allegedly opened fire on innocents citizens, and burnt some property during the attack that left the entire community mourning.

Disclosing the casualties figure, Police Public Relations Officer (PPRO), Adewale Osifeso, in a statement made available to newsmen on Sunday in Ibadan, added that the Palace of the Asigangan of Igangan Town was not spared by the gunmen during the attack yesterday..

According to him, the Commissioner of Police, Ngozi Onadeko, had on Sunday paid an on-the-spot assessment visit to the town to critically assess the level and cause of damage.

“Intelligence and Tactical apparatuses, consisting of Police Mobile Force personnel, Patrol units and other tactical teams in concert with Local Hunters and Vigilance Group from the community were deployed to forestall further breakdown of law and order in the area,” he said.

The commissioner urged them to partner with the police by way of prompt sharing of intelligence reports relevant to the ongoing investigations.