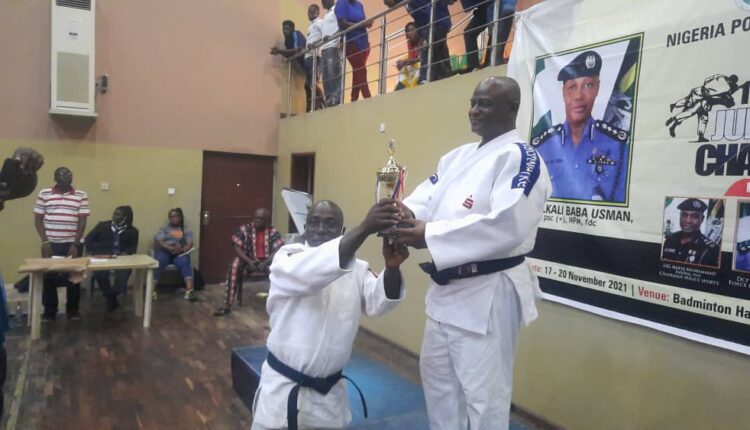 The commander of the Intelligence Response Unit (IRT), Olatunji Disu, and 11 other military officers have been decorated with gold medals after coming top of different weight categories at the Inspector General of Police (IGP) Veteran Judo competition.

The medals were presented to the winners by Deputy Commissioner of Police and the Force Director of sports, Patrick Atayero, and other dignitaries present during the closing ceremony of the competition’s first edition on Friday at the Police College in Ikeja, Lagos

Speaking to The Guild after receiving his medal and other rewards in the men’s -100-kilogramme category, Disu expressed joy that he emerged as the winner ahead of other competitors and thanked the IGP, Alkali Baba, for providing the platform to showcase their skills in martial arts.

He noted that the competition has further assisted him and other competitors, to sharpen their skills and show the young officers the importance of learning martial arts as a law enforcement officer in the country.

“I feel good that I got a gold medal from the 1st edition of the IGP veteran judo championship. I feel on top of the world. I feel good that I can still win a game be it veteran or anything. I’m happy that I’m in good health and every other person who has taken part in the competition because we were tested before we commenced this. The most important thing is that it goes to show that what we did when we were young is now assisting us as we grow older”, he added.

While urging young officers to emulate the veterans, the IRT boss disclosed that the art would assist them to discharge their duties as police officers effectively and would build their confidence level to go after any criminals within the country. 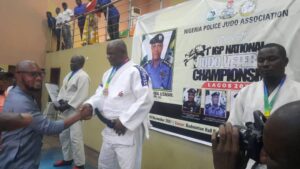 “Judo has helped me to be able to do my job as a police officer.  It gives me the confidence to face any situation and to tackle stress in my life. My life as a police officer is full of stress and what I’ve learnt in Judo assisted me to tackle my opponent and manage stress”.

Disu, meanwhile, urged parents to encourage their children towards participating in sports, particularly martial arts, saying it assists one to assimilate better in school.

According to him, becoming an expert in martial arts build one confidence to pursue any academic certification and confront societal challenges.

Also, Benard, who doubles as Director of Youth Development in Nigeria Mixed Martial Art Federation, described his victory as a reward for his constant practice even when there were no competitions.

Expressing his joy after being presented with the medal, the Judoka stated that martial art had often assisted him to be disciplined and contributed his quota towards the development of Nigeria.

He said: “I fought Judo about 18 years ago. I’m happy about the feelings to fight again. It awoke a nostalgia feeling in me being a veteran.

“That’s why in Judo, you see fighters bowing to one another to show a sign of respect and equality regardless of the belt. Academically, it sharpens their reasoning because even as a Judo fighter, I have a Ph.D. degree. Martial art teaches you to multitask”, Benard added.

A bronze medalist, Iyang Bassey, who was elated for coming third in his category, stated that Nigeria was the first country to organise such a competition for veterans of the art.

According to Bassey, it’s a great thing to be part of this because it is the first in Africa to organize a national veteran judo championship and I feel great that I am going home with a medal.

I was helpless watching my brother die- Dangote