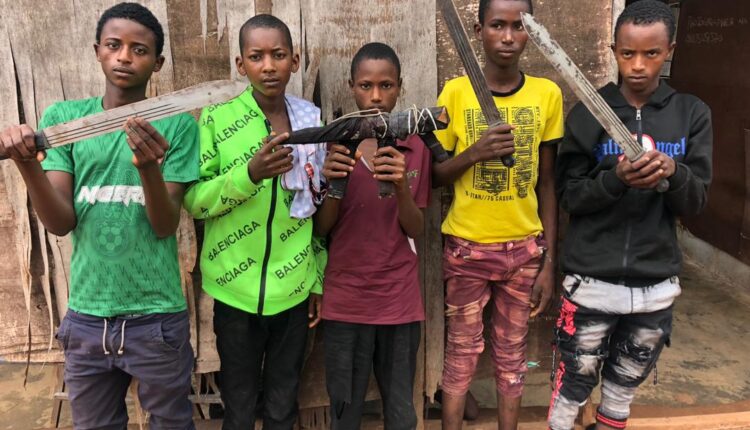 The Nigerian Police has arrested two other members of a teenage robbery syndicate that often disposes commuters of their properties on Lagos-Ibadan expressway in Lokoja, Kogi State.

Arrests of the two other suspects came barely 10 days after policemen attached to Owode-Egba division apprehended three of the five member-gang when they blocked Alapako end of Lagos-Ibadan expressway and disposed two occupants of a Mazda bus of N545,000 and a Itel phone.

The two suspects, Yinusa Isah and Ibrahim Muhammed, who accompanied others to rob occupants of the vehicle, fled when policemen from Owode-Egba division, alerted by residents, arrive the axis.

As gathered, operatives of Ogun State Special Anti-Robbery Squads (SARS) led by CSP Tijani Muhammed took over the case from the division, traced the suspects to Lokoja where they were arrested.

Confirming their arrest, Police Public Relations Officer (PPRO), Ogun Command, DSP Abimbola Oyeyemi, stated that after a thorough investigation, the case was transferred to SARS to fast-track their arrest.

Oyeyemi disclosed that after the case transfer, the three gang members made useful statements that led the operatives to Lokoja where two others were on the 24th of July, apprehended.

According to him, after the arrest, we recovered three cutlasses and a wooden craft as a gun by the suspects to scare commuters.

Meanwhile, the commissioner of police, Edward Ajogun, has ordered that the stretch of the expressway be properly combed to rid it of criminal elements.

Ajogun also directed a 24-hour physical police presence on the highway to guarantee the security of life and prosperity on highways across the state.