Next time you see an Oke Apomu LGEA School 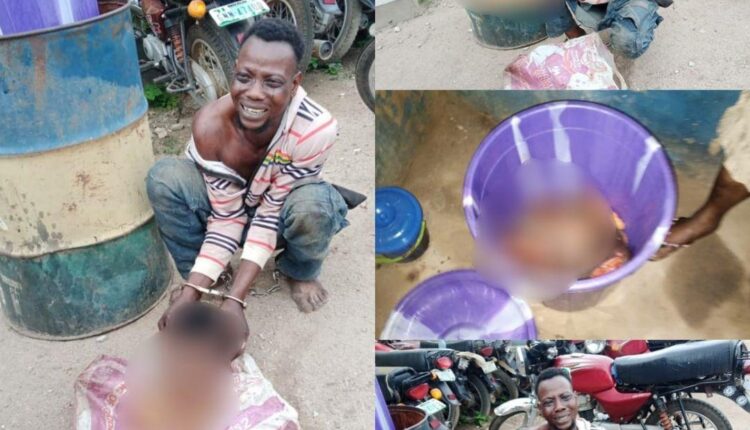 The Osun Police Command has arrested a 40-year-old hotelier, identified as Kabiru Oyeduntan, for allegedly been in possession of human parts in his house.

As stated, Oyeduntan was apprehended with butchered body parts of a yet-to-be-identified woman, said to be about 20 years of age on Thursday, June 10, by operatives of the police command.

The state police command spokesperson, Opalola Yemisi, in a statement made available to newsmen on Friday, said the police got an intelligence report on Thursday, June 10 at about 9 pm, that some ritualists beheaded an unknown lady at quarry area of Apomu.

The spokesperson noted that a team of police operatives in collaboration with the local security outfits swiftly moved into action and arrested the suspect with the dismembered parts of a suspected lady of about 20 years of age.

Yemisi added that some of the body parts of the deceased are still missing. She listed body parts recovered inside a box in one of the rooms of the suspect to include the head, wrist, feet, and some other parts of the severed body.

The suspect, when interrogated by the men of the operatives, claimed that one of his friends identified as Akin brought the deceased to his room to have sex with.

“He said he left them in the room and that when he returned, he found her dismembered body in his room. He says he doesn’t know the whereabouts of his friend.”

The police spokesperson added that the suspect would be charged to court as soon as possible and that efforts were being made to arrest the said Akin and other members of the gang.