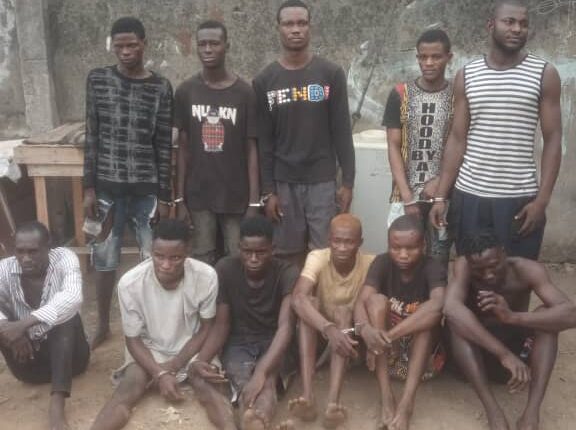 No fewer than 11 suspected cultists have been placed under detention after their arrest by Nigerian Police in Kosofe Local Government, Lagos State.

Aside from the arrest, three Deputy Commissioners of Police (DCP) recently posted to the state also resumed for work, assuring residents of Lagos their commitment to tackling crime across the state.

The Commissioner of Police, Hakeem Odumosu, who confirmed these developments on Monday, explained that the entire exercises were geared towards boosting the security of lives and property within Lagos.

Odumosu, in a statement made available to newsmen by the command spokesman, Olumuyiwa Adejobi, stated that the cultists were allegedly arrested for terrorising Owode Elede, Agiliti, Maidan, Afinjuomo, all in Mile 12 and Ketu axis of the state.

He noted that the suspected cultists were arrested during 48 hours operations carried out by the police operatives attached to Ketu Division of the command and were found with one locally-made pistol with life cartridges, weed suspected to be Indian hemp, and assorted charms.

The Police commissioner reiterated his commitment to fighting cultism and other crimes within the state to a standstill. He, therefore, directed that the suspects be handed over to the new Deputy Commissioner of Police State CID, Panti, for further investigation.

Odumosu, meanwhile, commended residents for their support in providing intelligence and commitment in all ramifications to making policing easy in the state.

The Commissioner, while deliberating with the officers on security situations across the state, stressed the need to harmonise the Anti Crime Strategies being put in place for better policing of Lagos State.

He noted that every department in the command must synergise with one another to form a strong bonding towards effective discharge of police duties.

The police boss, however, charged the officers to sanitise their departments as laziness, unprofessionalism, misuse of power, drunkenness on duty, violation of human rights and inappropriate behaviours will not be tolerated in the command.

He further admonished them to improve on the already existing modern policing platforms in the command.