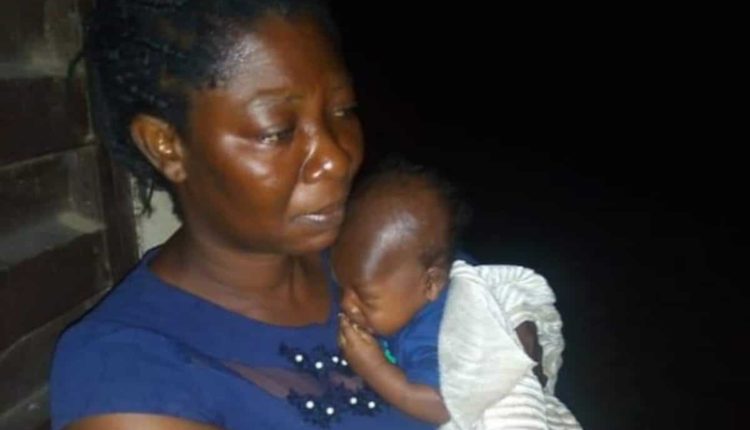 Operatives of the  Ekiti Police Command has arrested  39-yr-old lady, Mercy Momoh for allegedly stealing a two-month-old baby in  the state, Ado ekiti

Momoh, who hailed from Edo State, was arrested on Saturday at her residence located at Odo-Aremu area, along old governor’s office in the state capital.

Report has it that the baby was stolen from his mother, Funmilayo Sunday on Friday around 1pm at the State Secretariat.

It was gathered that the suspect tricked the baby’s mother, Funmilayo Sunday, to follow her to the State Secretariat under the guise to help collect some relief materials being given by government to flood victims.

The suspect, on getting there, sent the baby’s mother to help her procure recharge card but ran away with the baby before the arrival of the woman.

The command spokesperson, Caleb Ikechukwu, who confirmed the arrest to newsmen over the weekend  in Ado-Ekiti, said investigation is still on going to unravel the proper situation.

“It is confirmed that the woman who stole Two-Month-Old baby has been arrested by the operatives of the Ekiti Police Command.The suspect is Mercy Momoh, a 39-year-old lady from Edo State. She was apprehended through intelligence made available to the police and would be prosecuted after conclusion of investigation,”Ikechukwu said.

“Investigation is still on going. More details will come to reveal what really transpired. The Nigeria Police would no longer reveal to the public the means which they effect the arrest of criminals because criminals these days now always take advantage of such information.

“And acting on that information on how they can be arrested they now devise other means of carrying-out their nefarious act without being arrested. All I can tell you is that the woman that stole the infant baby has been arrested and investigation is still ongoing,” the command spokesperson said

“We call on members of the public to be careful when dealing with strangers. The suspect was apparently nice to the victim, that was why she got the baby easily. Citizens should not be carried away by kind strangers”, Ikechukwu said.