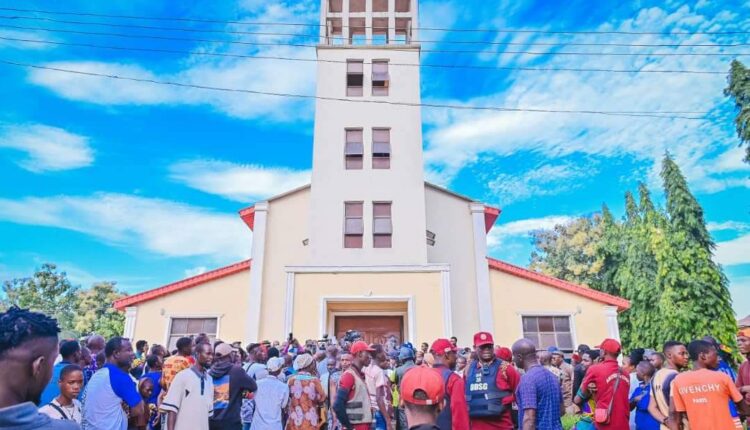 The Ondo Police Command and the state’s security outfit, Amotekun Corps, as well as the traditional rulers have disagreed over the alleged arrest of suspected killers of worshippers at the St Francis Catholic Church in Owo.

While Amotekun claimed that some of the perpetrators have been arrested, the Police and traditional rulers said that they were not aware of any arrests made in the state.

The divergent stance held by all parties came on Thursday after Amotekun Commander, Adetunji Adeleye, told newsmen in Akure, the state capital, that they have arrested some of the attackers, barely three weeks after 40 people were killed.

Adeleye, however, did not give the actual figure of the suspects arrested, but the corps leader was optimistic that everyone who was involved in the Owo Attack would be brought to book.

The Amotekun commander added that some weapons and the vehicle used by the Owo church attackers have been recovered.

When contacted for confirmation, the Ondo State Police Command through its spokesperson, SP Funmilayo Odunlami, said the force was not aware of such an arrest.

Nevertheless, it is expected that the Amotekun Corps would hand the suspects over to the police for further investigations and onward prosecution.

Also sharing the views of the police, the Olowo of Owo, Oba Ajibade Ogunoye, said that he was yet to be briefed of any arrest and that he would only accept the claim until Amotekun paraded the suspects.

Also, the Director of Communication for the Catholic church, Augustine lkwu, said that the church can’t react now until it has full information on the arrest of suspected killers of members of the church.

Also, the Christian Association of Nigeria CAN, Ondo state branch, speaking through its Public Relations Officer, Daisi Ajayi, pleaded for time to get the full details of the arrest.

The alleged arrest came barely 24 hours after President Muhammadu Buhari assured Nigerians that the attackers who he described as “cowards” behind recent assaults on churches in the country will be punished.

“As for the cowards, they will be punished for their crimes. We will bring them to justice. Rest assured that the full might of Nigeria’s formidable security and intelligence forces are involved in that endeavor,” Buhari was quoted as saying in a statement by his media aide Garba Shehu.

“For now, I urge all Nigerians to come together in prayer-whether Christian, Muslim, or any of our great faiths- let us hold the victims and their families in our hearts and minds.

According to President Buhari, the country’s religious freedom and diversity are what make Nigeria great.

JUST IN: I’ll not contest for governorship election again- Oni