After cancelling the annual colloquium over deadly coronavirus outbreak in Nigeria, National leader of the ruling All Progressives Congress (APC), Asiwaju Bola Tinubu, on Sunday, celebrated his 68th birthday in a low-key, to avoid violation of the gathering order of the state.

To prevent members of his party gathering at his house, Tinubu, who was a former governor of Lagos State, celebrated the day within his premises in Bourdilon, Ikoyi with few members of his family.

In a picture obtained by the Guild, the national leader of the ruling party was seen cutting his cake with his wife, Senator Oluremi Tinubu, who currently represent Lagos-Central senatorial constituency, at the entrance of the main building. 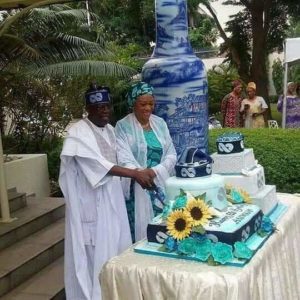 Earlier, Tinubu, in a statement to mark his 68th birthday, had urged Federal Government to suspend Value-Added Tax for 2-4 months to help lower import costs and protect against shortages that have further become heightened with the outbreak of coronavirus.

He said although the natural instinct for the government is to reduce spending, such a move would only feed “economic carnage by amplifying economic hardship.”

“At a minimum, the federal government must stick to its naira budgetary expenditures. In fact, the government should increase naira expenditures by at least 10 – 15 per cent during an emergency.

“Allocations to state and local governments should be included in this addition. If not, we risk subnational recessions in important sections of the country.”

The national leader of APC said if the virus is largely kept from becoming a widespread public health menace, government should accelerate spending and actual work on key infrastructural projects particularly regarding transportation.

“This will lower costs while bolstering the economy by generating employment and business activity. If the virus does become a large-scale public health challenge, more funds should be allocated to the health sector.”

The former governor urged the Central Bank of Nigeria to lower interest rates to spur borrowing and private sector activity.

“CBN and other financial regulators should be alert to signs of fragility in the financial markets and banking sector.

“The Central Bank should be prepared to enact extraordinary measures should the financial sector exhibit stress. The CBN should be prepared to give banks liberal access to its loan discount window to ensure adequate liquidity within the banking sector. The Cash Reserve Requirement for banks should be revised downward.”