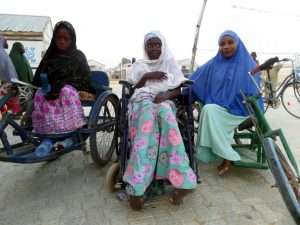 The Federal Government has restated its commitment to care for and support women and girls living with disabilities across the country, saying plans have been concluded to bridge the gaps in operationalising the mainstreaming of gender and disabilities at field levels.

It explained that it would be collaborating with relevant stakeholders, local and foreign working partners in ensuring the welfare of the physically challenged persons are catered for without hitches across Nigeria.

The Permanent Secretary, Ministry of Humanitarian Affairs, Disaster Management and Social Development, Bashir Alkali, who made the pledge during a one-day meeting on the development of strategies for care and support for women and children with disabilities in Nigeria on Tuesday in Abuja, noted that no efforts would be spared in achieving the objectives.

Represented at the event by the ministry’s Director of Humanitarian Affairs, Ali Grema, Alkali said that the specific needs and capacities of women and girls with disabilities were often under presented.

According to him, they are often excluded in decision-making processes as well as in coordination activities. Women and girls with disabilities have attitudinal barriers from community members, their families and service providers alike, as well as environmental and communication barriers.

“These barriers have not only reduced their voices and participation in programme planning, but also their access to essential services, including sexual and reproductive health and gender-based violence. No single actor or stakeholder, working alone, can implement the Discrimination Against Persons with Disabilities Prohibition Act of 2018 effectively.

“Thus, the Minister, Hajiya Sadiya Umar Farouq last year inaugurated the Coalition of NGOs for the care and support of women and girls with disabilities in order to promote and advance their rights and we are 100 per cent committed to that,” Alkali said.

On her part, the ministry’s Director, Special Needs, Nkechi Onwukwe, said that the meeting was aimed at evolving strategies on holistic care and support for women and children with disabilities.

Onwukwe said that it was in line with Social Development Goals numbers 1, 3 and 5, adding that the ministry would continue with its concerted efforts towards addressing issues that relate to persons with disabilities in Nigeria in general.

In his remarks, the Executive Secretary, Commission for Persons Living with Disabilities, James Lalu, said that issues of women with disabilities were of priority attention to the commission.

He said that he was aware that the minister was doing a lot to ensure that the commission had a huge budget next year to help take care of a lot of programmes for all persons living with disabilities in the country.

Lalu encouraged all persons living with disabilities to always report issues of harassment, discrimination and stigmatisation against them to the commission.

“We have about five lawyers who are always ready to take up any legal issue concerning persons with disabilities in the country. Also, our engineers have done assessment work in Uthman Dan Fodio University of Sokoto, ABU Zaria and others on disability-friendly structures in the institutions. A lot of good things is coming to us soon,” he said.

Also, the Chief Executive Officer and Founder of Albino Foundation, Jack Epelle, alleged that Churches and Mosques in the country are not disability friendly.

“It is good to have structures that are friendly to all spheres of the society. This will enhance inclusion that would enhance the lives of persons living with disability.”