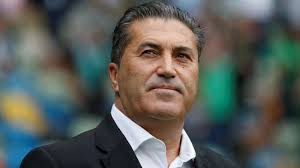 The head coach of the Super Eagles, Jose Peseiro has promised that Nigeria would win during the 2023 Africa Cup of Nations (AFCON) qualifiers against S-Leone and qualify for the tournament.

He assured that the team would defeat the Leone Stars of Sierra Leone during their first match of the 2023 AFCON qualifiers.

Peseiro noted that he had accepted the job to be the head coach because he is hopeful of winning the 2023 AFCON with the team.

The newly appointed head coach noted that he had always followed Nigeria’s football history and that he was optimism about bringing victory back to the country.

“I came here for one goal. I want to win the next AFCON for my fantastic players and for Nigerians. I am confident because I believe in this team. I believe in the quality and the number of good players.

“I have followed Nigeria’s history in football from the 1994 and other successful teams. I want to bring joy back to Nigerians,” he said.

On his part, the Minister of Youth and Sports Development, Sunday Dare, during an official meeting with Peseiro on Wednesday, in Abuja, said that the Super Eagles were in a rebuilding process and urged Peseiro to ensure discipline and regain fans’ confidence in the team.

The minister said that Nigerians would like to see the hunger, aggressiveness and commitment in the team which Peseiro leads and urged the coach to give opportunity to talents in the country’s domestic league.

According to Dare, Nigeria Football Federation (NFF) were rebuilding the national team to create a competitive and strong team by giving opportunity to the raw talents that abound in our domestic league.

He said that it be a blend of the best that the country has at home and abroad as it is the DNA of Nigerian football and assured the head coach of support by the NFF and the Super Eagles.

“We welcome Peseiro to Nigeria and we have seen that you have hit the ground running to help restore the confidence in the team, especially after the World Cup ticket loss.

“This is a start of a rebuilding process. We are a football-loving nation. We love to win all the time, even though we know it’s not possible.

“We urge you to ensure consistency and discipline in the team on and off the pitch. It is a critical instrument for the success of the team,’’ he said.

As gathered, the Portuguese had his first outing with Nigeria during the 1-2 loss to Mexico in a friendly on May 28.

He later led the team to a 0-1 to Ecuador on Thursday in another friendly in the U.S. and will now lead them in their first competitive game on Thursday in Abuja.