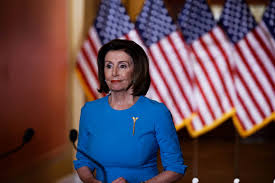 Speaker of the United States House of Representatives, Nancy Pelosi, has disclosed plans to set up a committee to  monitor and oversee implementation of the two trillion dollar stimulus fund approved by congress as response to the coronavirus pandemic in the country.

Pelosi explained that the fund, which was aimed at mitigating economic fallout of the global viral pandemic in the nation, would be monitored with aim to ensure that it was properly disbursed to vulnerable American families who were in dire need of government support.

She stated that such move was necessary in order to discourage waste or mismanagement of the funds, and also to ensure that all disbursements were made in an accountable and transparent manner to its expected recipients.

Speaking to newsmen in the country on Thursday, the speaker disclosed that the committee, which would be led by U.S. Representative, James Clyburn, and constituted of members from both the Republican party and Democrat party, would have subpoena powers in order to effectively guard against fraud.

She however added that though there was no assurance of plans to misappropriate the funds, it was expedient to adequately monitor, and work against any such eventuality of embezzlement or misuse, so as to curb such incidence.

“We have to make sure there are not exploiters out there … Where there is money there is frequently mischief,” she said.