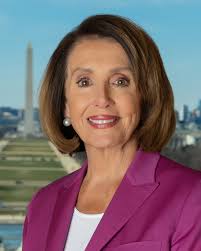 The Speaker of the United States House of Representatives, Nancy Pelosi, has endorsed the Democratic Presidential Candidate, Joe Biden, for president, saying that the former Vice-President possesses qualities needed to lead America, especially during the nation’s coronavirus health crisis.

She stated that her endorsement was due to Biden’s vast government experience and the roles he played during tenure as the incumbent President, Barack Obama’s second in command.

Pelosi, who added her voice to that of other notable American personalities through a video statement released on Monday, said that the pivotal role played by the presidential aspirant in passing of the Affordable Care Act, popularly known as Obamacare, was evidence of his qualifications for the keenly contested position.

“As we face coronavirus, Joe has been a voice of reason and resilience, with a clear path to lead us out of this crisis”, she said.

Biden had also received an endorsement from Washington State Representative, Pramila Jayapal, who described the democrat as a dedicated public servant, and said that he had the ability to unite the people.