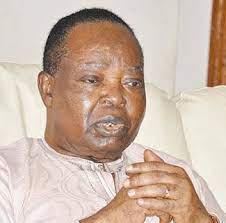 The newly-elected National Chairman of the People’s Democratic Party (PDP), Dr. Iyorchia Ayu, has condoled with the Wayas family over the passing on of former senate president, Dr. Joseph Wayas.

Ayu joined millions of Nigerians to commiserate with the family over the demise of the elder statesman who was pronounced dead at the age of 80 by medical experts in London, United Kingdom (UK) after a brief illness.

The newly elected national chairman, who was also former Senate President, described his late predecessor as a quintessential democrat who left bold prints on the politics and political history of Nigeria.

Ayu stated these through a statement made available to newsmen on Thursday by his media team in Federal Capital Territory (FCT) Abuja, after news filtered in that the Cross River-born former senate president had passed on peacefully.

While recalling the role played by the late Wayas during the Second Republic, Ayu stressed that the deceased administrative style was second to known and that history would never forget his contribution towards strengthening democratic values in the country.

He added that the stability brought to the national assembly leadership under his tenure coupled with colour, style, and depth distinguished him over the years.

Regretting that Nigeria will miss Wayas’ fatherly advice, Ayu prayed for God to grant him eternal rest and give his family the fortitude to bear the irreparable loss.

Part of the statement reads: “I join millions of Nigerians across different strata of life mourning the passing of this great Nigerian statesman. He dedicated his life to the service of his Fatherland.

“He was a great man, a quintessential democrat, and an outstanding statesman who has left very bold prints both on the politics and political history of Nigeria.

“As Senate President in the Second Republic, he brought stability, style, and depth to his leadership of the National Assembly at the time.

“Even after the collapse of the Second Republic, Wayas continued to be a stabilizing force. We recall his work as a statesman at the 1994 Constitutional Conference.

“I wish to convey my heartfelt condolences to his family, the people and government of Cross River State as well as the Federal Government of Nigeria.”