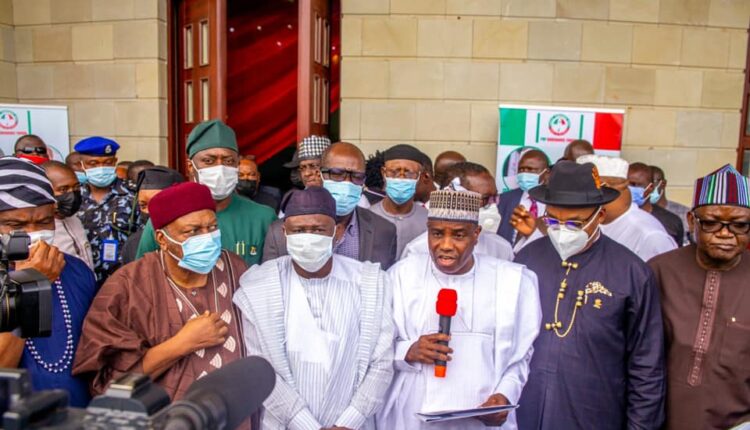 The Governors elected on the platform of the Peoples Democratic Party (PDP), have said that the gunmen attack on police stations and Nigerian Correctional center in Imo State further indicated the leadership incompetence that had enveloped the administration of President Muhammadu Buhari since assumption of office.

They stated that the rise in criminalities that had continued to fuel ethnic and tribal tensions, religious divisions, and various forms of social and political cleavages, showed that Nigeria was in dire need of leadership at the Federal level to avert the looming disaster.

According to them, the deteriorating relations between various groups in Nigeria, even as all the country’s fault lines and differences are being stretched to the limit by the APC government that clearly lacks the capacity to govern.

The governors, under the aegis of the PDP Governors’ Forum, expressed their displeasure over the current state of the country after a meeting in Makurdi, Benue State yesterday.

“Time has come to take advantage of the ongoing Constitution Amendment process to decentralise the security architecture of Nigeria and involve States and Local Governments”, he added.

Tambuwal explained that the Governors reaffirmed their conviction that an urgent devolution of powers and restructuring of the country in a way that brings together various groups and tendencies in the country appears to have become imperative and timely now as Nigeria cannot afford another civil war.

He noted that it is a scandal that 21 years after the 1999 Constitution came into being, no new Revenue Formular is in place, saying, there is need for a more transparent and accountable running and operation of the NNPC.

He said PDP governors further condemned the intimidation of their incumbent colleagues by the APC administration using all sorts of weapons like security agencies, unequal access to federal resources, promotion of divisions in the opposition political parties with fake promises and falsehoods.

“We significantly condemn the double standards that are applied by the APC-led federal government to intimidate PDP-controlled states. To this end, we call on Mr. President to lift the so-called “No flight Zone” and other intimidating tactics, imposed on Zamfara State as similar measures have not been extended to similar states with security challenges like Kaduna, Borno, Katsina, Yobe, and others. This is mostly politically motivated to ensure that the Governors move over to APC.”