Gunmen trap inside prison after attacking facility in… 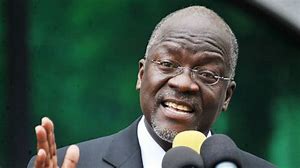 The Tanzanian President, John Magufuli, has revealed that a pawpaw, goat, sheep and other non-human subjects have tested positive for the deadly coronavirus pandemic, saying that testing kits available in the country are faulty.

He said that the bogus tests had been carried out in the state-owned laboratory, on non-human subjects in order to ascertain the veracity of received results and to confirm the true position of the country in its fight against the viral infection.

Magufuli said that the positive results had proved that the test kits, which were received as part of coronavirus relief, were faulty, and called to question the motives behind the purported aid.

The president, who spoke to newsmen in the country on Sunday, stated that the results showed that Tanzania, which had recorded 480 coronavirus incidents within its borders, should, in reality, have a much lower number of confirmed cases.

Though Magufuli did not specify the country from which the tests were received, he questioned the motive behind the aid and called on nations to look inward in the fight against the deadly global pandemic.

According to him, “There is something happening. I said before we should not accept that every aid is meant to be good for this nation”.

The Tanzanian president hinted at the possibility that new coronavirus tests would be conducted and revealed that the nation would import herbal coronavirus treatments from Madagascar.

“I’m communicating with Madagascar. They have got a medicine. We will send a flight there and the medicine will be brought in the country so that Tanzanians too can benefit”.