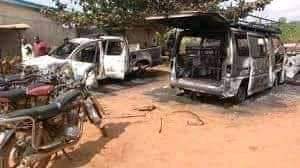 Residents of Ebonyi State have started raising concerns over level of insecurity across the state after gunmen invaded a Nigerian Police divisional headquarters, killed a law enforcement officer, and set over two patrol vehicles ablaze.

The fears of the residents, after the attack on the Police division in Ohauku Community, were that the state could go the way of Anambra state where it has become unsafe for residents to move and do business without any fear and harassment.

The residents’ fear bordered around if the attackers were not quickly arrested and prosecuted in accordance with the country’s law, the gunmen could embark on another operation and possibly make the state unsafe for all.

Speaking after the attack during an interview with newsmen on Monday, Police Public Relations Officer, Loveth Odah, assured residents that the State 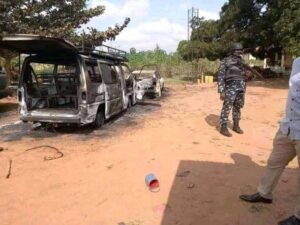 Command has intensified a manhunt for the perpetrators and others planning to embark on such across the state.

According to her, the Commissioner of Police, CP Aliyu Garba has visited the scene of the unfortunate incident and called on people in the area to assist the police in arresting those behind the attack.

On the attack, she narrated that the officer died while being rushed to the hospital for medical attention after sustaining gunshot wounds.

Odah, meanwhile, has debunked claims been peddled on different social media platforms that the gunmen freed some inmates.

Sunday’s attack was the latest in a series of attacks on police stations and security personnel in the South-East region.