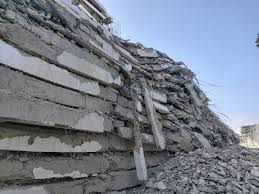 The panel investigating the circumstances that led to the Nov.1 collapse of a 21-storey building located on Gerard Road, Ikoyi, Lagos. has postponed their proceedings until January 12 and 13, 2022.

The postponement was said to have been necessitated by the power outrage at the time with the continuation of the testimony of a structural engineer and the Managing Director of Prowess Engineering Nigeria Ltd, Muritala Olawale.

When proceedings began, the Coroner, Oyetade Komolafe, was said to have suggested that the proceedings should be postponed to a later time during the day or adjourned till another date.

Komolafe noted that the microphones in the courtroom and the equipment used to record the proceedings were not working due to power outage.

“You will not be able to hear me and we will also be unable to hear the witness,” he said.

As gathered, the collapse of the high-rise building was reportedly said to have caused the death of 46 persons, one whom was Femi Osibona, the contractor of the project and Managing Director of Fourscore Heights Ltd.

Olawale, was said to have on Dec. 15 told the coroner inquest that he rendered structural consultancy services to the late Osibona and the initial brief his firm received was for three blocks of four-storey buildings.

He said that Osibona kept revising the brief by adding more floors to the buildings and that his team were only responsible for the first floors of the 21-storey Block B which collapsed.

Olawale told the inquest that Osibona was the contractor/builder of the project and was also in charge of getting all government approvals for the high-rises.

“I never saw the approved architectural drawings, mechanical drawings and electronic drawings for the project,” he said.

The structural engineer noted that when he realised that standard construction procedures were not being observed on the site, his company withdrew their services to Osibona via a letter dated Feb. 20, 2020.