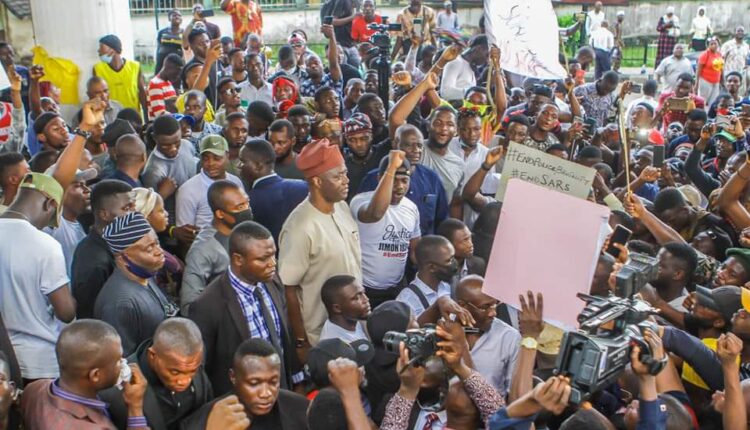 The Oyo State Government has disclosed that plans are being concluded to engage youths alongside other stakeholders on non-violence conflict resolution that would aid their plight in their quest to end police brutality across the country.

It explained that though the youths seeking outright scrapping of Special Anti-Robbery Squad of the Nigeria Police Force were exercising their constitutional guaranteed right, there was need for the protest to be devoid of violence and bloodshed across the country.

The state’s Governor, Seyi Makinde, who declared his full support call for an end to police brutality, stressed that the ongoing protests must continue to be peaceful and constructive in order to achieve the desired result.

Speaking while addressing the EndSARS protesters, who converged at the Government Secretariat, Agodi, Ibadan, yesterday, Makinde assured that his government would put in place mechanism to ensure protesters’ safety in the state.

According to him, beyond the EndSARS protests, there were underlying challenges of pervading anger and frustration in the land and leaders have to do more to create employment for the teeming youths.

He said there was need for government across all tiers to rise up to the occasion and do the needful in creating enabling environment for citizens, particularly the youths to thrive and be productive rather than being battling with unemployment and frustration.

“Peaceful protest is guaranteed under our constitution, but I want to beg you, all of the protesters that have been detained will be released. I have spoken with the Commissioner of Police and the Attorney-General of the State. But we cannot do some of the good things we have in an atmosphere of chaos. I have listened to you. I have the Commissioner for Youths here. He will see and engage with your leaders.

“So, what I am saying is, I am with you 101 per cent. I want to thank you because you are Nigerian youths and you are not lazy. You are not violent; you did not vandalise anything. What you have done is to show peacefully that certain policies of government, especially the brutality by the Nigeria Police Force should be addressed,” he said.

Makinde stated that his government would follow the path of constructive engagement to diffuse the tension in the land to prevent avoidable loss of lives and properties in the state.

According to him, one of the things we have in view is to follow the path of constructive engagement and there has to be a way to get that engagement going.

“The President and the IGP said SARS has been disbanded. In Oyo State, hold me responsible and accountable. I don’t want any further loss of lives. All of us must take that responsibility to behave responsibly.

“We will have to find a way to engage ourselves. There will be palliatives that the Oyo State government will roll out within the next one week. All the stakeholders must find a means to get people who will represent them. There is no way we can have any meaningful discussion in an atmosphere of chaos.

“When somebody said we should use force, I said we cannot use force, because I came to you when I was looking for votes. You organised yourselves and voted for me. And it is now time for me to listen to you and ensure that whatever it is that you want done by your government, we will find a means to do it.

“But the major relevant issue is that we need to provide employment, means of livelihood for our youths and, on that, I am with you. I identify with you. And collectively, we will make our state and country better,” he said.