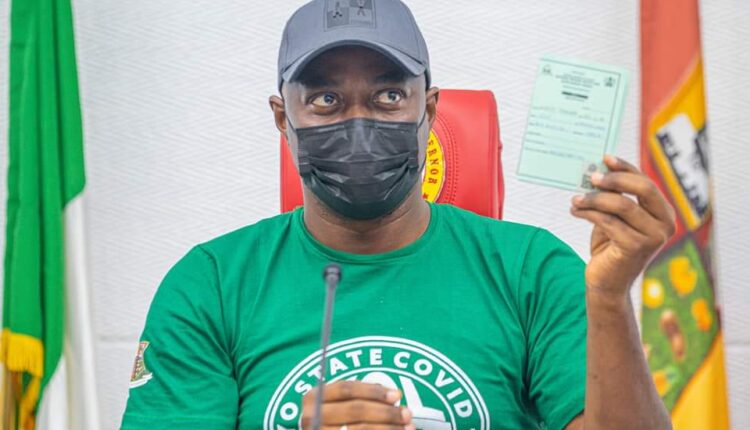 Oyo State Governor, Seyi Makinde, has disclosed that the state would not hesitate to procure coronavirus vaccines during such times when the need arise in ensuring that all eligible Oyo residents are vaccinated against the raging pandemic.

He added that his administration was committed to protecting citizens and residents of the state from all forms of diseases, particularly the deadly respiratory disease currently ravaging the world.

Makinde stated the doses approved for the state by the Federal Government was nothing compared to Oyo population and that his government was ready to independently procure vaccines for the people when the need arise.

The governor made this known on Wednesday after receiving the AstraZeneca COVID-19 vaccine in Ibadan, the Oyo State capital, alongside the Secretary to the State Government, Ilubamiwo Adeosun, other government functionaries and frontline health workers,

Makinde, who was the first to receive the jab administered by the Executive Secretary, Primary Healthcare Board, Dr. Muideen Olatunji, at the Executive Council Chamber of the Governor’s Office, Secretariat, Agodi, Ibadan, said that he was convinced that the vaccine was safe and without side effects for human beings.

Speaking after receiving the vaccine, the governor enjoined residents of the state to have confidence in the process and pledged that the state would continue to monitor the process for necessary actions.

The governor noted that the sterility tests carried out on the COVID-19 vaccine by two laboratories in Ibadan confirmed its safety. He, therefore, appealed to residents of the state not to doubt the vaccines.

“I did not want to take the vaccine because naturally, I have a very low tolerance for physical pains; but when duty calls, we have to do what we have to do.

“I think we have to show leadership. We have to let the people know that they are protected. When I was reading the newspaper this morning, I saw where they said Oyo State has not given a single shot of the vaccine. So, they recorded zero for Oyo State. But now we have at least one,” he said.

He further explained that the state embarked on sterility tests to enable it to confirm the safety of the vaccines for all.

“We did it because when I asked questions about the origin of the vaccine, they said the jabs that came to Nigeria were sent from India. Not that I don’t like India, or I don’t believe in their products, but the handling. They said this thing should be stored at a certain temperature, I wanted to validate that the vaccine we will give to the people of Oyo State has been correctly handled.

“We have our two labs here, the Virology Lab and the Bio-repository Lab, and they all came with the same results that the vaccine is good and proper for the consumption of the people of Oyo State; and it didn’t take me 24 hours after that to set and agree to come for this vaccination.

“127,000 is nothing when you compare it with the number of people we have to vaccinate in Oyo State. But we will continue getting whatever has been given and where we need to augment and go on our own to buy, we will do it when we get to that point.

In his remarks, the state’s Commissioner for Health, Dr. Bashir Bello, stated that the vaccines were kept at the required temperature in a bid to ensure that they are safe for human consumption.