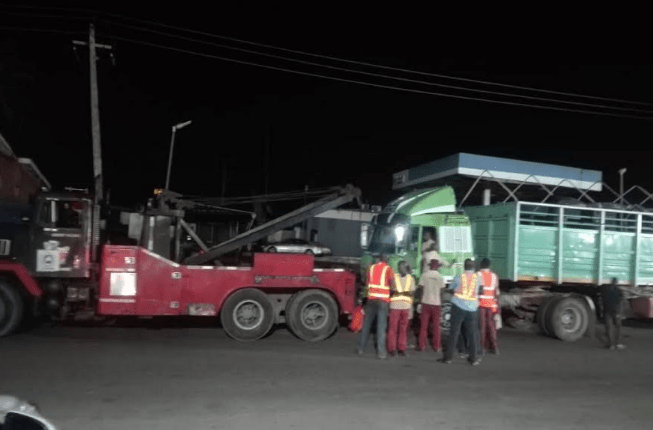 The Oyo State Government has impounded no fewer than thirty-six commercial trailers and other articulated vehicles for flouting the restriction placed on movement by the government in the state.

It explained that the action had become imperative after the impounded trailers and other articulated were ferrying people across the state as against the permitted content approved by the government during the lockdown, a development that can aid the spread of the deadly coronavirus in the state.

The Chairman, Oyo State Road Transport Management Authority (OYRTMA), Akin Fagbemi, said the trailers and articulated vehicles impounded by officers of OYRTMA belonged to some haulage companies and logistics departments, adding that their action contravenes measures put in place by the government to mitigate the spread of the pandemic which necessitated the restriction placed on inter and intrastate vehicular movements and the influx of foreign persons into the state.

Fagbemi, in a statement through the state’s Commissioner for Information, Culture & Tourism, Wasiu Olatunbosun, on Thursday, noted that the trailers and vehicles were impounded when officers of the agency were carrying out routine operations and surveillance in the state, adding their operators flouted the government directives by using their trucks to convey people from neighboring states as against the approved carriage of food items, pharmaceutical products, and other essential goods and services

“Some articulated trucks and trailers numbering about 36 were impounded in Oyo State between Wednesday 1st of April, 2020 and Wednesday 8th of April 2020 for violating the restriction of movement orders of the State Government, having previously established that the virus is majorly transmitted through human movements from one place to another. These articulated vehicles were seen conveying hundreds of persons as against the approved food items, pharmaceuticals and other essentials without any official permit or convincing reasons,” the statement said.

Fagbemi, however, advised all companies, drivers of articulated trucks, to desist from flouting the government directives by engaging in an authorized movement of people around the state, adding that any vehicle impounded shall be made to face the full wrath of the law.