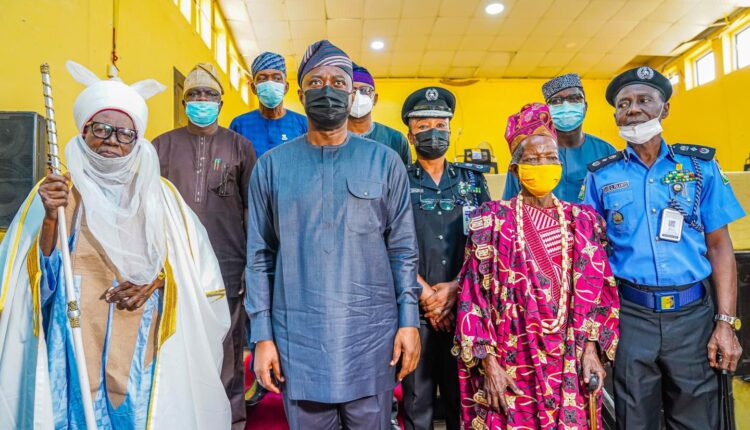 The Oyo State Governor, Seyi Makinde, has approved the reopening of Shasha market for economic activities barely two weeks after it was shut down following traders’ crisis that claimed lives and property.

He explained that the need to sustain the local economy and ensure people go about their legitimate business without resorting to illegal activities for sustenance necessitated the decision to reopen the market.

Makinde, who gave the directive on Tuesday, urged traders, communities, and residents around the market sited in the Akinyele Local Government Area of the state to live peacefully with each other irrespective of ethnic and religious differences.

Speaking during a meeting with the leaders of the two warring communities and security agencies at the House of Chiefs, Secretariat, Agodi, Ibadan, the governor maintained that reopening the market would halt the declining economic situation and the peculiarities associated with the state.

Addressing the leaders, he said, “considering the economic situation and the peculiarities we have with us, I have heard what you said, and we will immediately reopen the Shasha market. They will bring bulldozer to the market today.

“When my brother governors visited Seriki Shasha’s palace, while we were working around, I realised that both the people I saw at Seriki’s place and those I met at Baale’s place were not happy because they have been deprived of doing their jobs.

“If you look at Oyo State, even when the COVID-19 was at its peak, I decided not to shut our market places because I know and also explained to the leadership of the country at the national level that in our state, we have people that the proceeds from what they get today will determine if they will eat tomorrow or not.

“So, considering the economic situation and the peculiarities we have with us, I have heard what you said, and we will immediately reopen the Sasa Market. The Commissioner for Local Government is here. They will bring bulldozer to the market today or tomorrow morning. They will clear the place and whatever palliatives we can do will be done.

“But I want to appeal to you largely to continue to have a good relationship with the Baale and Seriki of Sasa just the way it has been. Please, go back to it and wherever you need our support, we will ensure we give it to you. And if there are challenges, we are all here to fix them for you. Return to the market and Sasa community.

“So, once again, I am coming back to Sasa Market when the commercial activities must have begun fully. The solar street-light installed at Ojoo will also be installed at the market so that you can trade both day and night and the community also will be well illuminated.”

Furthermore, he explained that while the Shasha market has been reopened, the Iroko market where the crisis began would still remain under lock and key.

According to him, I directed that the market be reopened except the Iroko market where the crisis originated from which is to remain closed.

“The Iroko market will remain shut. From what we heard, the promoters of that market were part of the people causing confusion and problem at Sasa market. We will take a long-term view of the Iroko Market but in the meantime, it must remain shut.”

While appealing to both ethnic groups to restore their previous amicable relationship, Makinde directed that the market be cleared of all debris and that solar street lights be installed across the market.