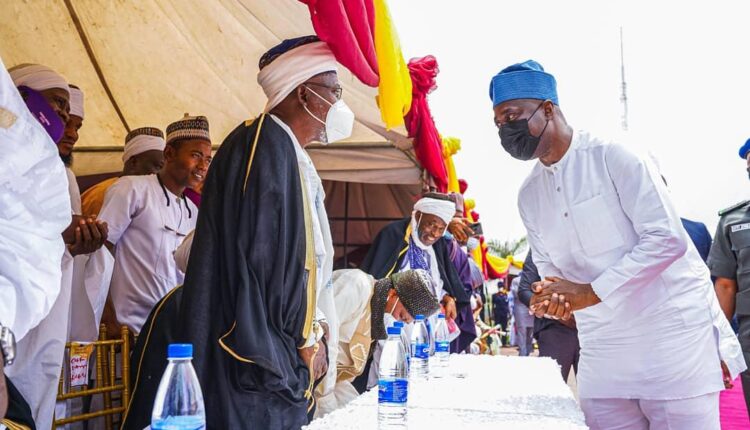 As part of measure to sustain religious harmony in Oyo, the State Governor, Seyi Makinde, has approved a public holiday to mark commencement of the Muslim annual lunar calendar, Hijrah.

Makinde added that beginning from next year, the first day of the year would be set aside for Muslim faithful in Oyo to celebrate the beginning of New Year.

He made this declaration during celebration of Prophet Muhammed birth known as Mawlud Nabiyy held at the Government House Arcade, Agodi, Ibadan, yesterday.

The declaration was in response to public demand that the first month of the Islamic calendar was when the Prophet emigrated from Mecca to Medinah in Saudi-Arabia.

He noted that during the consultations, it was discovered that the agitation was the wish of the people and that it would be unnecessary to deny Muslims rights to have a holiday on the first day of the lunar year.

According to him, another issue raised by Muslims is the Hijra holiday which they claimed past administration announced a public holiday and that when I came into office, it was cancelled. When this issue came up, I asked them if they announce a holiday in some places in Saudi Arabia.

“And I also asked why it is not a national holiday. Or is it that some people are trying to use this issue to play politics in Oyo and Osun states? Or are they doing something that our religion dictates?”

“If you check the four major pillars of this administration, we anchored Economy on two pillars. One of the persons handling a part of it is my Special Adviser on Economic Affairs, Professor Babatunde and the person in charge of Oyo State Investment Promotion Agency, Ogunwuyi. One is a Christian and the other is a Muslim. I called them and asked that if we truly want our economy to expand and we declare holiday every time, will people take us seriously? So, different suggestions came up bothering on the continuation of this or not.”

“For the first year, we could not have a landing. So, we continued with that discussion but since the Aare of Musulumi asked for it and because all of you also put in place this government, we will be observing Hijra as a public holiday in Oyo State.”

“So, the major challenge we are faced with is contributing your quota and, for me, whatever is necessary, we will do it. Don’t be afraid because the government is doing everything possible to ensure that all of us sleep with our eyes closed in our different homes. Cooperate with the government to make this state move forward”.

Earlier,  the Aare Musulumi of Yorubaland, Edo, and Delta States, Dawud Makanjuola, appealed to Nigerians, particularly, politicians not to use political warfare to destabilize the country.

He, however, charged Muslim faithful in the state to express great love towards one another and pursue the life, message, and character of the Greatest Creation, Prophet Muhammad as he is recognized, stated that the prophet propagated and preach peace during his lifetime.

The event was also attended by Secretary to the State Government (SSG), Olubamiwo Adeosun; Head of Service, Ololade Agboola and Chief of Staff, Bisi Ilaka, among others.

Other dignitaries in attendance were the Alaafin of Oyo, Oba Lamidi Adeyemi; Olubadan of Ibadanland, Oba Saliu Adetunji, Aje Ogungunniso 1, Chief Imam of Ibadanland, Sheikh Ganiyu Agbotomokekere and the former state chairman of the Christian Association of Nigeria, Pastor Benjamin Akanmu as well as the Chairman of the Oyo State Pilgrims Welfare Board, Christian Wing, Bishop Ademola Moradeyo among others.