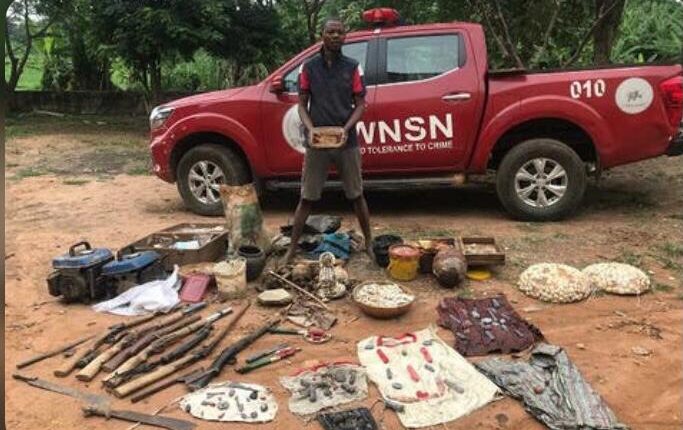 The Oyo Security Network Agency, also known as, Amotekun Corps, has arrested a 40-year-old businessman, identified as Mutiu Abdulrasheed, for allegedly selling human parts in Ibadan, the capital of the state.

As stated, the business, said to be a herbalist was apprehended on Saturday, May 29, in his residence at Lagelu Local Government Area of the state.

Confirming the arrest yesterday, the Commandant, Col. Olayinka Olayanju, while parading the suspect at Amotekun’s office, said that the Abdulrasheed belongs to a gang that specialized in obtaining human body parts by killing or exhuming fresh corpses, which were also being cut into pieces for sale.

The Amotekun chief disclosed that they had been on Abdulrasheed’s trail for months and engaged a young man as a mole, in order to get the details before the security operatives were able to arrest him.

The commandant stated further that another suspect, known as Baba Ishola, is currently at large after he became suspicious that Abdulrasheed had been arrested.

Olayanju said the suspect would be transferred to the state police command for further investigation.

Speaking with newsmen, during interrogation, the 40-year-old suspect confessed to exhuming dead bodies but said he had never engaged in killing anyone in his life.

He added that he learnt about corpse exhumation from his master under whom he trained as a herbalist in Apomu, Osun State.

One dies during Police, kidnappers gun battle in Adamawa