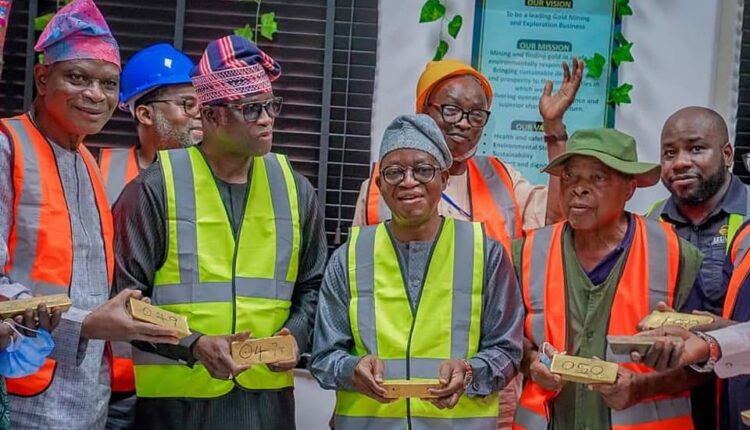 The Osun State Governor, Gboyega Oyetola, has expressed the readiness of his administration to partner with willing investors in the country with interest in responsible gold mining in the state.

He said that his government has put in place necessary and business friendly policies such that would attract investors and ensure their enterprise flourish with less bottlenecks from host communities and government agencies.

Oyetola added that his administration was ready to offer relevant help and work together with critical stakeholders to improve the local economy by attracting investors that would augment the government’s efforts in diversifying the state’s economy.

Oyetola made this known during his after facility tour of the mining sites of Segilola Resources Operating Limited located in Iperindo, Imogba and Odo Ijesa, all in Atakunmasa East Local Government Area of the state recently.

Oyetola and his entourage inspected the Water Storage Dam used in processing the raw gold, process plant area, mining pit and sick bay for the employees of the mining company. The high point of the visit was the unveiling of unrefined Gold samples, mined by Segilola Resources Operating Limited by Governor Oyetola.

He described the project as a practical step to good governance and commended the leadership of the firm for a job well done.

The governor who noted that his visit was memorable and historic as a result of the significant achievement recorded by the gold mining company, said that the project was a reflection of the diversification policy of President Muhammadu Buhari.

Oyetola who expressed personal conviction that the future of the state of Osun is assured, charged the host communities to continue to make the environment conducive for the gold mining company.

On his part, the Chief executives officer of Segilola Operating Resources Limited, Segun Lawson, appreciated the government for providing the enabling environment leading to the successful completion of the project within the spate of eighteen months.

This he said was made possible through the maximum support and cooperation the company enjoyed from the State government. The Chief Executive Officer maintained that the company had impacted positively on the host communities to enhance community relations.

Lawson stated that the employment process in the organization was non discriminatory, saying over twenty percent indigenes of the host communities were employed by the company.

The governor was accompanied to the mining sites by the Deputy Governor of the state, Benedict Alabi; the Secretary to the State Government, Prince Wole Oyebamiji; the Chief of Staff to the Governor, Dr. Charles Akinola; Deputy Chief of Staff, Prince Abdullah Binuyo; Head of Service, Dr. Olowogboyega Oyebade; other cabinet members and a former Chief of Defence Staff, Lt. General Alani Akinrinade.