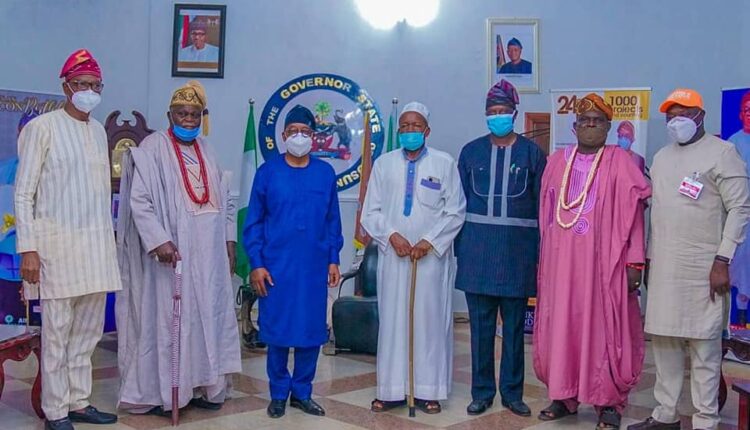 The Osun State Governor, Gboyega Oyetola, has met with the Elerin of Erin-Osun, Oba Yusuff Oyagbodun II, and the Olobu of Ilobu, Ashiru Olaniyan II, as part of efforts to broker peace and restore unity between the warring towns of Erin-Osun and Ilobu.

As stated, the peace meeting with the traditional rulers of the two towns held at the Government House in Osogbo on Monday was to strategise on the best approach to be adopted in ending the crisis between the communities and restore lasting peace.

As gathered, the monarchs pledged to prevail on their people to eschew violence and embrace peace in the interest of all during the meeting which also had in attendance the Olufon of Ifon, Oba Almoroof Magbagbeola.

It would be recalled that Oyetola had yesterday ordered immediate deployment of armed policemen in collaboration with the army to restore law and order across warring communities in Irepodun Local Government Area of the state.

He also pleaded with the warring groups in the communities to sheath their sword and give peace a chance, adding that development would be elusive without peaceful coexistence in the area and Osun generally.

Oyetola also counseled residents and citizens not to take laws into their own hands, insisting that reprisal attacks and continuous acrimony would only heighten insecurity and strip the state of its peaceful status in Nigeria.

Through a statement by his Chief Press Secretary, Ismail Omipidan, Oyetola maintained that the peace and unity of the local government area were important and should not be compromised.

According to the statement, the governor gave the order on Sunday morning during a marathon meeting with heads of security agencies in the state, where the situation in Ilobu and Erin-Osun was critically examined.

“As government, we are resolved to do everything possible to protect citizens from actual and potential threats. To this end, we have ordered the immediate deployment of security operatives to restore law and order.

“I want to appeal to our people not to destroy our collective heritage by taking laws into their own hands. Two wrongs don’t make a right. I, therefore, appeal to the warring parties to sheath their sword and allow peace to reign,” the governor added.

Meanwhile, hours after deploying the security agents, the governor also imposed a 24-hour curfew in Irepodun and Orolu Local Government Areas of the state over the crisis.

He explained that the need to douse tension in the troubled areas necessitated the declaration of curfew, adding that the dusk to dawn directive would subsist until further notice.

“As a responsible and responsive government that took the sacred oath to protect the lives and property of our citizens, we believe that the declaration of curfew is the way to go in this circumstance.

“By this, security operatives have been directed to arrest and prosecute any person found violating the curfew and those responsible for the violence.

“All citizens and residents of the affected Local Government Areas are enjoined to comply with this directive as any person found contravening this order shall be made to face the wrath of the law. Government enjoins all our citizens to be peaceful and to be law-abiding as all efforts shall be made to protect them and their property,” a statement signed by Secretary to the State Government, Wole Oyebamiji, on Sunday said.