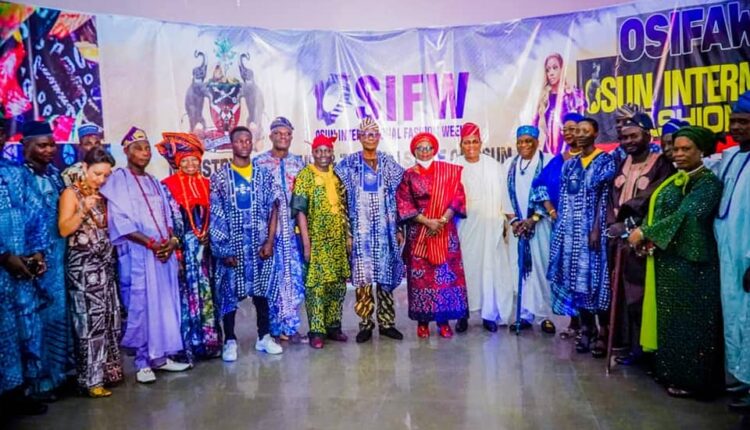 The Osun State Governor, Adegboyega Oyetola, has launched mass production, promotion, and marketing of local fabric known as Adire Osun, saying his administration would be boosting the state’s economy through the product’s production and exportation to other state and international markets.

Oyetola stressed that the state under his watch would continue to support the cause of employing indigenous resources to grow her revenue base, saying that the initiative for cultural repositioning, renaissance, and economic recovery was in line with the administration’s Development Agenda.

Oyetola who also declared every Thursday as ‘Adire Osun Day’ directed all public and civil servants to wear adire fabric to their respective offices on Thursdays, adding that the initiative was in furtherance of the administration’s effort to preserve and promote the production of Adire fabric as well as bolster the image of Osun as a culturally inclined state.

Launching the initiative at the De-Destinguished Event Centre, Osogbo during the weekend, Oyetola said that the initiative was to reawaken people’s consciousness towards a socio-cultural and artistic renaissance in the state and ensure the diversifying the Osun’s economy and creating jobs for the teeming youths.

He said that in achieving this objective and take its plans to fruition, the state government has partnered with Musty Great Development and Alexandria Jones Couture, U.S.A, to organise the International Fashion week, for the promotion of Osun brand of Adire (Adire Eleko) for Global exhibition.

“I wish to recall that at the inauguration of this administration under my leadership, I did state that the economy of our State should be repositioned and that Economic Summit would be organised to among other initiatives, develop strategies that would drive meaningful youth employment, enhance food security and agricultural development, activate mining prospects and boost tourism potential of the State.

“You will also recall that I stated in my inauguration speech that the Medium and Small-Scale Enterprises would be strengthened to enhance their productive capacity so as to generate jobs, create wealth, and further boost our local economy.

“I also promised that the State of Osun would be made a cultural destination and tourism enterprise zone in the South West. It is in line with the above Vision that the Government has swung into action by harnessing all the various tourism resources that the State is greatly endowed with.

“Due to the various commitments of the State Government, the Federal Government and other Private and Public Development Partners are collaborating with the State for the provision of infrastructure and the upgrade of our cultural and tourism sites to global standards,” Oyetola who was represented by the Secretary to the State Government, Prince Wole Oyebamiji, said.

He also urged the residents to take advantage of the opportunities offered by the initiative to draw economic opportunities and benefits to themselves for huge economic development.

“In furtherance of efforts of this Government to preserve and promote the production of Adire Osun as well as bolster the image of Osun as a culturally correct and indigenous product inclined State, every Thursday has been declared Adire Osun Day. Consequently, effective from August 27th, 2021, all Public and Civil Servants in the State shall wear Adire to work”, he declared.

Earlier in his remarks, the State Commissioner for Culture and Tourism, Dr. Adebisi Obawale, said that the initiative was aimed to unlock the untapped potentials in the areas of culture, fashion, and tourism.

According to him, the purpose is to build marketing channels through which Adire products would be produced, promoted, and marketed globally, noting that the epoch-making event has brought participants from far and near most importantly from five countries of the world to Osun as part of efforts to ensure that Osun takes its rightful position in culture and tourism.

To achieve the initiative, Obawale noted that the government has organised producers’ as association, formed them into cooperative society, and registered them with the ministry of commerce.

To achieve full benefit of the opportunity, Obawale further informed that, government would deploy new marketing technology, give relevant training to get the best quality products and impact necessary ethical training on the producers and marketers to remain relevant at all times in the market.

“As the first government to consider tourism as potential for economic diversification and sustainability, in keeping faith with our commitment to resuscitate dying culture, and also in the pursuit of our resolve to allow the State to take her rightful position in the history of Adire in the world.

“Our tourism for sustainable economy, launched last year, is also premised on youth engagement as job provision is a critical element of well-intentioned policy in today’s world. Today event is in support of our youths and aim at opening their eyes to age long untapped potentials in the area of fashion,” Obawale added.