Oyetola tenders over N100bn as 2021 budget, prioritises plans for post-COVID-19 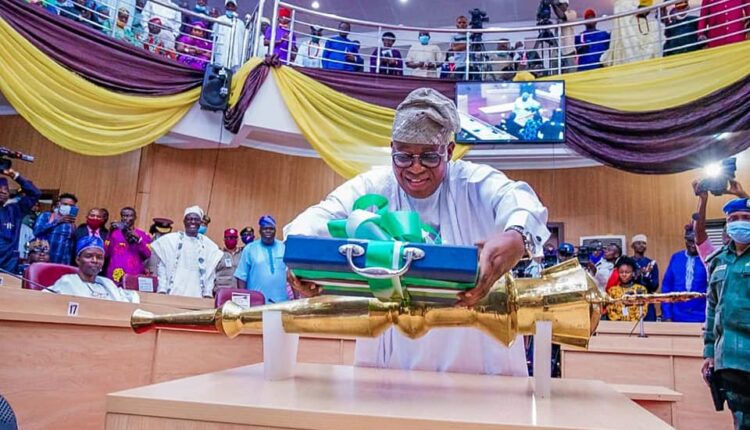 The Osun State Governor, Gboyega Oyetola, has presented the 2021 proposed budget estimated at over N109.9 billion to the State House of Assembly for consideration and approval.

He explained that the N109.8 billion estimated budget named “Budget of Providence” had been put together to prioritize and facilitate smooth recovery from the harsh effect of coronavirus pandemic outbreak.

Fayemi, while presenting the budget at the State House of Assembly complex, Oyetola put the
recurrent expenditure at N50,620,283,140.00 representing 46 percent, while capital expenditure was N59,234,768,500.00 representing 54 percent.
The breakdown of the budget indicated that the education and health sectors got substantial shares as N10,711,328,430.00 representing 18.08 percent was allocated for education sector while health sector received N10,647,909,910.00 representing 17.98 percent. Similarly, N4,271,461,870.00 representing 7.21 percent was earmarked for infrastructure sector while Water and Sanitation sector got N4,220,446,550.00.
The sum of N3,404,734,560.00 representing 5.75 percent was budgeted for agriculture sector; N1,134,043,200.00 representing 1.91 percent for Commence and Industry sector; N1,515,122,570.00 representing 2.56 percent for Governance and Administration; N173,035,800.00 representing 0.29 percent for Economic Planning and Budget sector; N167,247,560.00 representing 0.28 percent for Environment sector; and N638,460,000.00 representing 1.08 percent for Social Development and Welfare sector.
Also, N1, 487,110,159.00, representing 2 percent of the total budget has been earmarked for youth related activities.
Furthermore, N134,379,500.00 representing 0.23 percent was budgeted for Security Justice sector and N155,830,830.00 representing 0.62 percent for Information and Communication sector.
At the presentation on Tuesday in Osogbo, the Governor said that the 2021 Draft Budget was crafted based on the state of Osun Development Plan (2019-2028).
He said that the appropriation bill was also crafted in line with the Medium Term Sector Strategy (2021-2023); the administration’s manifesto; “Thank You Tour report” as well as the Citizens’ Need Assessment carried out in the 30 Local Governments plus one Area Office of the State.
Speaking on the main features of the budget, Oyetola said inputs were sought from various stakeholders in the process of the formulation of the appropriation bill being presented while urging residents to support the government in its efforts to jerk up the Internally Generated Revenue.
”Despite the current economic situation, the government will remain undaunted and resolute to provide sustainable livelihood and economic mainstay for the citizenry, most importantly, our teeming youth population.
”In that direction, I have recently flagged off the commencement of the International Trade Centre, Dagbolu. The Trade Centre, commencing from the next two months, will generate not less than 10,000 new jobs, 80 per cent of which will go to our youths in the State through the Dry Port, Car Marts, sundry commodity merchandises, ware housing and logistics.
”In view of the fact that the youthful population of Osun state is one of the greatest assets of the State in its economic diversification agenda, it is pertinent for Government to mainstream them into the state’s socio-economic activities. Thus, the State is poised to vigorously promote the Youth Export Development Programme (YEXDEP) in the State to enhance the contributions of the State’s youths to the non-oil export sub-sector of the economy.
“To show our government’s seriousness and commitment, a sum of N1, 487,110,159.00 has been earmarked for youth related activities in the 2021 Budget proposal,” adding that the interventions will be in Mining, Agriculture, and Skills upgrade and Entrepreneurship Development programme for youths (supported by MSME/BOI Fund) among others.
Earlier in his welcome address, the Speaker of the State Assembly, Timothy Owoeye, said the legislative arm of the state government was impressed by performance index of the 2020 budget, which was 85.4 percent as at September ending, describing it as a laudable feat.
He maintained that the 2020 budget, tagged “Budget of Restoration”, did not betray its nomenclature particularly during the COVID-19 pandemic, adding that the government was also able to embark on numerous capital projects, fulfill its obligation and make life meaningful for the people.
He also commended the administration for prompt payment of salaries, pension, and the recent increase in workers’ salaries across the State