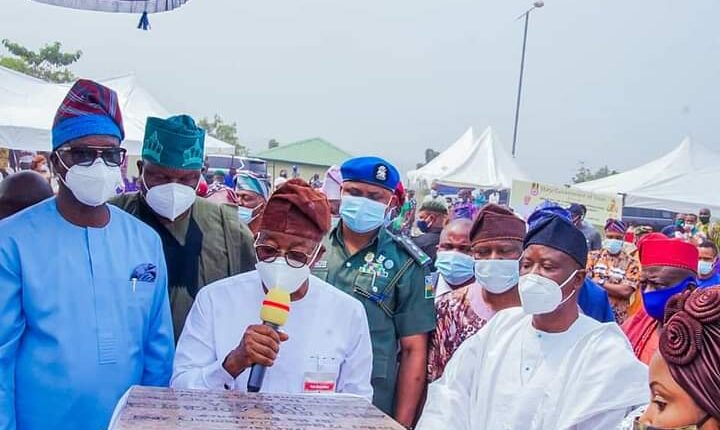 The Osun State Governor, Gboyega Oyetola, has disclosed that his administration would be targeting several policies aimed at creating job and investment opportunities that would in turn ensure economic boom in the state through the free trade zone.

He indicated that his administration was poised to explore all investment opportunities and create business friendly environment such that would attract investors to the state for the benefits of the citizens, particularly the youths, in addressing issues bordering on unemployment.

Oyetola said that several policies and programes would be considered in repositioning the state’s economy such that would ensure every citizens were carried along in the rebuilding process.

Speaking on Friday during the flag off construction work of a juice production company owned by Collins Crown Limited at the Omoluabi Free Trade Zone in Osogbo, the governor said that his administration would stop at nothing in achieving its plan for the economy.

According to him, the initiative by Collins Crown Ltd. aligns with our admin’s commitment to ensuring that the massive investment opportunities available in our State are taken advantage of by investors.

“Building the Osun of our dream requires that we’ve an economy that’s revitalised on account of the volume of economic activities that it encourages.

“We’re hopeful that in coming months, more firms will spring up within our Free Trade Zone and other areas in the State. Our government will continue to work with the organised private sector to attract more investments and ensure that investors’ experience in our State, is truly rewarding,” he said.

While thanking the company for their sustained interest in doing business in Osun, he assured that his administration was ready to support the company in creating jobs employment opportunities for the citizens.

“Osun is no doubt economically endowed with great potential for fruits harvest, hence, the need to have the fruit juice production plant so that several tons of these agricultural produce which rot away annually could be gainfully utilised as raw materials for the industry,” he said.