Aduke Gold, Bidemi Olaoba, others to perform during praise… 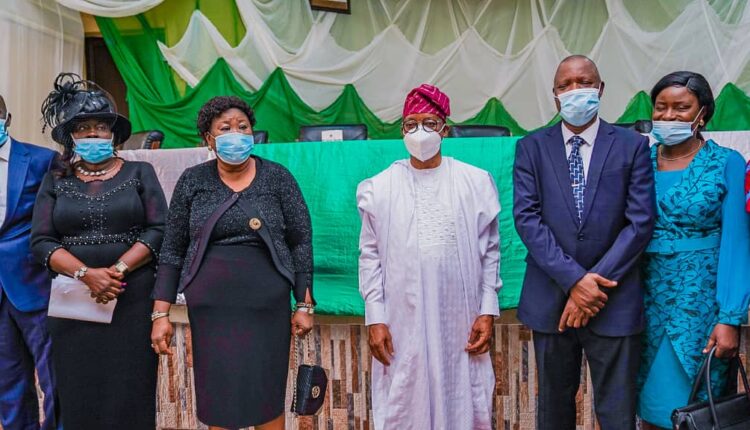 The Osun State Governor, Gboyega Oyetola, has sworn in two new judges of the Osun Customary Court of Appeal, Justices Ayoade Adesina and Ojo Muibat, and tasked the newly sworn-in justices on professionalism and integrity.

This is coming as he also charged them to always stand on the path of truth even when such an endeavor was not convenient in the course of their duties.

Oyetola said that it has become imperative for the new legal luminaries to set the path for the state’s judiciary through reforms that would expand the customary court roles.

Speaking on Monday during the swearing-in ceremony, the governor while congratulating the duo, said that efforts must be made by both justices in setting standards of excellence in the state judiciary.

Oyetola, however, charged the newly sworn-in justices to uphold and improve on standards left behind by their predecessors saying their new offices demand integrity and professionalism at all times.

“The ability to remediate these situations bestows a huge responsibility on the Judges of the Customary Court of Appeal. It also requires high integrity and an impeccable heart for the people and their customs and traditions. I charge your Lordships to follow in the tradition of excellence the Osun Judiciary is noted for.

“As the Appellate Customary Court, you must raise standards by giving justice to citizens denied same at the lower courts. To achieve this, the Court must always apply the tenets of fairness, integrity, incorruptibility, and fearlessness in the dispensation of justice.

“Judges must always remember the sacred duty they owe to society and, as such, diligently serve as unbiased arbiters constantly committed to the triumph of truth and equity. It is when you do this that posterity will be kind to you for having used your professional calling to serve God and mankind in the development of a better society.

“I assure you of our Administration’s commitment to your welfare and the provision of requisite infrastructure to support your duties. We are very determined to support the visionary leadership of the Judiciary in the determined quest to raise the bar of judicial excellence in our State,” he governor said.

Meanwhile, after their inauguration, Oyetola presented official cars to the two justices, saying the fleet was to support them in performing their roles effectively.

“Our government remains committed to the welfare of our judicial officers and will continue to provide them the enabling environment to discharge their duties,” he added.

In his remark, Justice Adesina, who spoke on behalf of his colleague, expressed gratitude to the Governor for finding them worthy to serve the State in the new capacity.

He pledged their commitment to sticking to their oaths of office and allegiance and reflect a high sense of professionalism in their assignments without fear or favour.

Those in attendance at the ceremony were Chief Judge of Osun, Justice Oyebola Ojo; Commissioner for Justice and Attorney General, Barrister Femi Akande; Head of Service, Dr. Olowogboyega Oyebade; Aragbiji of Iragbiji, Oba Abdul-Rasheed Olabomi, top government functionaries and members of the State Judicial Service Commission, among others.