We have introduced strategies to investigate Kano mass… 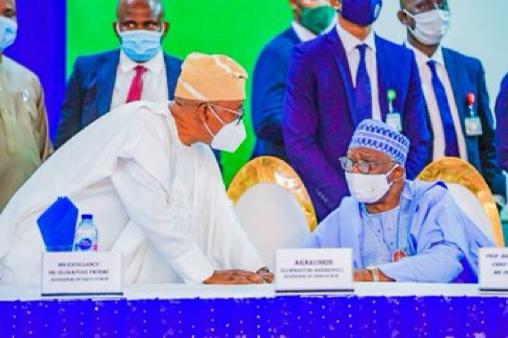 In a bid to bridge gaps and channel talents and creativity of population of teeming youths across Nigeria, the Osun State Governor, Gboyega Oyetola, has suggested that youths active inclusion in decision makings, particularly in areas of government programs and development process, would assist in shaping the country and prepare young Nigerians for leadership positions.

He explained that the suggestion had become imperative following the level of organisation, orderliness and accountability that dominated protests against police brutality by youths across the country before the movement took a violent dimension that led to destruction of properties and looting spree.

The Governor noted that with first hand experience of what the youths can achieve given the chance, it was pertinent for leaders across Nigeria to draw lessons from activities of youths during EndSARS protest and give them the pride of place in governance and other developmental process.

Giving breakdown of South West Stakeholders meeting held on Sunday through his social media page, Oyetola maintained that that the EndSARS demonstration had shown the youths how powerful and important their population are, adding that it was important that governors and political leaders inculcate the youths in task of governance and nation building.

According to him, with their huge population and  technology advantage, our youth constitute a major political force and we cannot afford to take them for granted.

“Today in Lagos, I attended a South West stakeholders meeting, where we discussed the ENDSARS  protest, its aftermath in our region and the way forward. The meeting was attended by other South West governors, ministers, Obas, security officials, the IGP, DG, DSS & FG officials, including the Chief of Staff to President Muhammadu Buhari.

“We noted that the EndSARS  protest has certainly awoken our youths to their civic power, and we need to convert that power to positive advantage. With their huge population and the technology advantage, our youth constitute a major political force & we cannot afford to take them for granted.

“We also expressed the need for us as leaders, to urgently fashion out ways of not only catering for the interest of our young people in governance but also ensuring their active inclusion in the development process,”

Explaining the initiatives being taken in Osun, Oyetola said that his administration had developed a robust youth policy christened ‘The 4 Es’ – Youth Empowerment, Youth Engagement, Youth Entrepreneurship and Youth Education, adding that plans are being concluded to unveil the policy and work towards its full implementation.

Another move, he said, was the 2021 budget which the state has designed programmes for the engagement of Osun youth in Agriculture, Mining, ICT, Culture & Tourism and Commerce among others, stressing that his administration was committed to the growth and development of  young people.