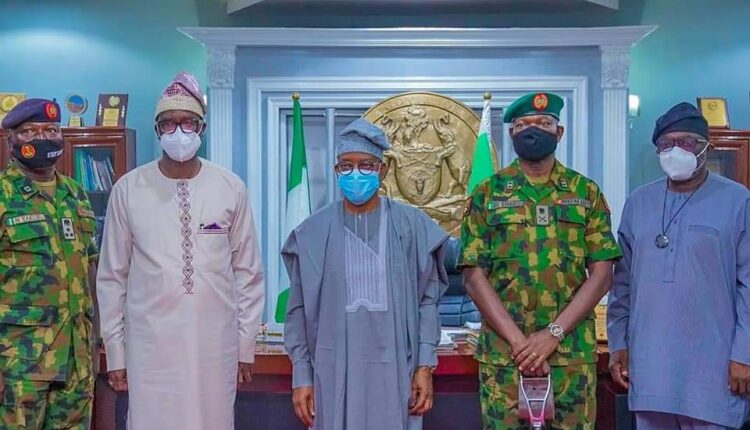 The Osun State Government, Gboyega Oyetola, has restated his administration’s commitment to improving the state’s security architectures, adding that his government would also be approaching Nigerian Army in helping to curb influx of illegal miners into Osun.

He added that the government would continue to maintain its relationship with security agencies across the state in protecting residents and indigenes such that would maintain the state’s peaceful status.

Oyetola also restated the administration’s determination to ensure timely and prompt support to security agencies in the provision of modern security apparatuses to enhance their service delivery.

Speaking when he received in audience the General Officer Commanding, 2 Division of Nigerian Army, Ibadan, Major General Gold Chibuisi and his team, the governor appreciated the high sense of commitment and dedication of the officers and men of the Nigerian Army to security in the state in particular and Nigeria as a whole.

Oyetola who expressed delight at the visit said that their presence was a confirmation of the fact that the government had kept faith with its commitment to strengthening the bond of relationship between it and the security agencies, particularly the military.

“I must also thank you most sincerely for providing the right leadership at all times, particularly your prompt and prominent role during the Endsars protest to maintain peace for us. I must commend you and appreciate that. So also, the Chief of Army Staff for ensuring that the peace of the State is not compromised. We are always willing to work with security agencies. That is why we formalise regular support for the security agencies, particularly the military because the rate of insecurity is on the increase virtually across the country.

“So, for this, we shall continue to need you, particularly at a time the issue of kidnapping, banditry among other criminal acts are on the increase. We will need more of your support to put an end to the influx of illegal miners in our State.

“We need your assistance in that direction because regular forces might not be able to cope with the level of influx because it has been discovered that the illegal migrants have access to virtually all our roads. We need your support to be able to flush out all criminals coming into our State in disguise for mining.

“We are desirous of development, and this can only be achieved in the atmosphere of peace. We welcome people who want to do legitimate business. We are very friendly and we are very accommodating, but if the peace of the State is being threatened by illegal migrants, then, we must ensure that they are flushed out and this can only be achieved through collaboration with security agencies.

“I want to appeal to you to further strengthen your collaboration with other security agencies to be able to flush out those threatening our peace in the State and by extension, the country as a whole. I must thank you once again for your past support and I want to assure you that the kind of existing relationship between the State and the Service would be maintained,” Oyetola added.

On his part, Chibuisi applauded the Oyetola’s administration for its commitment to the security of lives and property of the citizens and its timely support for security agencies, particularly officers and men of the Nigerian Army operating in the state.

He added that the army remains committed to partnering with the state in its efforts to strengthen the security of the state and to protect the lives and property of the citizens.

Chibuisi who led other top military officers to Osun said he was fully aware of the unparalleled commitment of the state government to raise the bar of security in the state and maintain its status as the most peaceful State in the country.

The new GOC who said the senior military officers were on familiarisation and thank you visit to the state, said the visit was imperative in view of the numerous support and cooperation the Division particularly the Engineer Construction Command situated in the State have been receiving from the government over the years.

“I took over on the 11th of March this year and it is important that I take a tour to all the formations and units in the Division. This is in line with the position to move in the direction of the new leadership of the Nigerian Army led by the Chief of Army Staff, Lieutenant General Attahiru Ibrahim.

“We recognised that there are stakeholders that we need to interface with and one of those is the State authorities, so I felt it was very important to pay a courtesy call to the Executive Governor of Osun as part of effort to further let government know that the Nigerian Army remains fully committed working with the states especially in matters of security to ensure that the good people of our land are law-abiding and they go about their lawful businesses without any harassment.

“I have been briefed by the Commander, Engineer Construction Command, who is physically present here, and he had told me of the immense support he had got from your government. I have to put it on record that your government has been very supportive to the Nigerian Army. We are very grateful for your timely support and we know that this synergy with the state government and indeed with other stakeholders in the state have gone a long way to ensure adequate security in the State.

“On our part, we are supporting other security agencies, particularly the police to further enhance the security in our land hence the need for our soldiers and the personnel to discharge their duties professionally, efficiently, and in accordance with the rules of engagement ascribed to military norms.

“Your Excellency, the purpose of this visit is to thank you for all you have been doing to keep the State safe, peaceful, and secure for the citizens, particularly for finding time out of your tight schedule to receive us,” he added.